“Viento en contra o al favor?”. Notably off-colour with some kind of fever, I was doubting whether I should head back into the desert at all. “Oh you’ll have a strong tailwind, definitely a tailwind”, replied the farmer. Not twenty minutes later I was experiencing the strongest headwind of my life.  At one stretch I was being blown off the road with little control with every gust.

Arguably some of the dullest moments in history have been experienced cycling against Patagonian headwinds. The effort it takes to travel just a few metres can feel excruciatingly pointless. The only option is to find a patience you never knew you had. When the road finally turned, the relief of flying into Tres Lagos with a tailwind was indescribable. 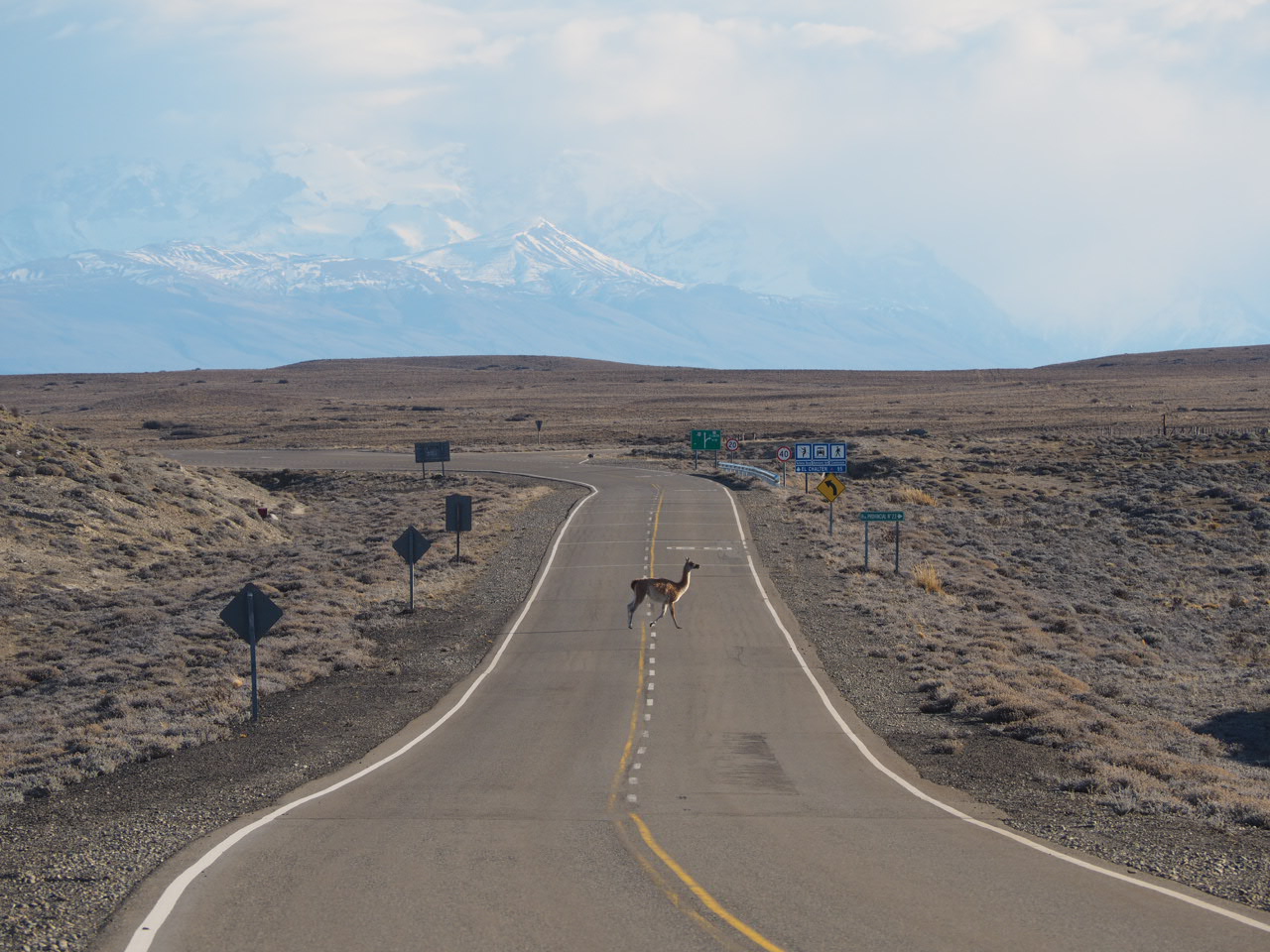 The Argentinian pampa is a treeless landscape with virtually zero wind protection. (Darting back and forth across the road by the turn off to El Chalten, this guanaco offered me several attempts to find the shot I was looking for before he finally made up his mind.)

Some photos and story of the days between Gregores and El Chalten: 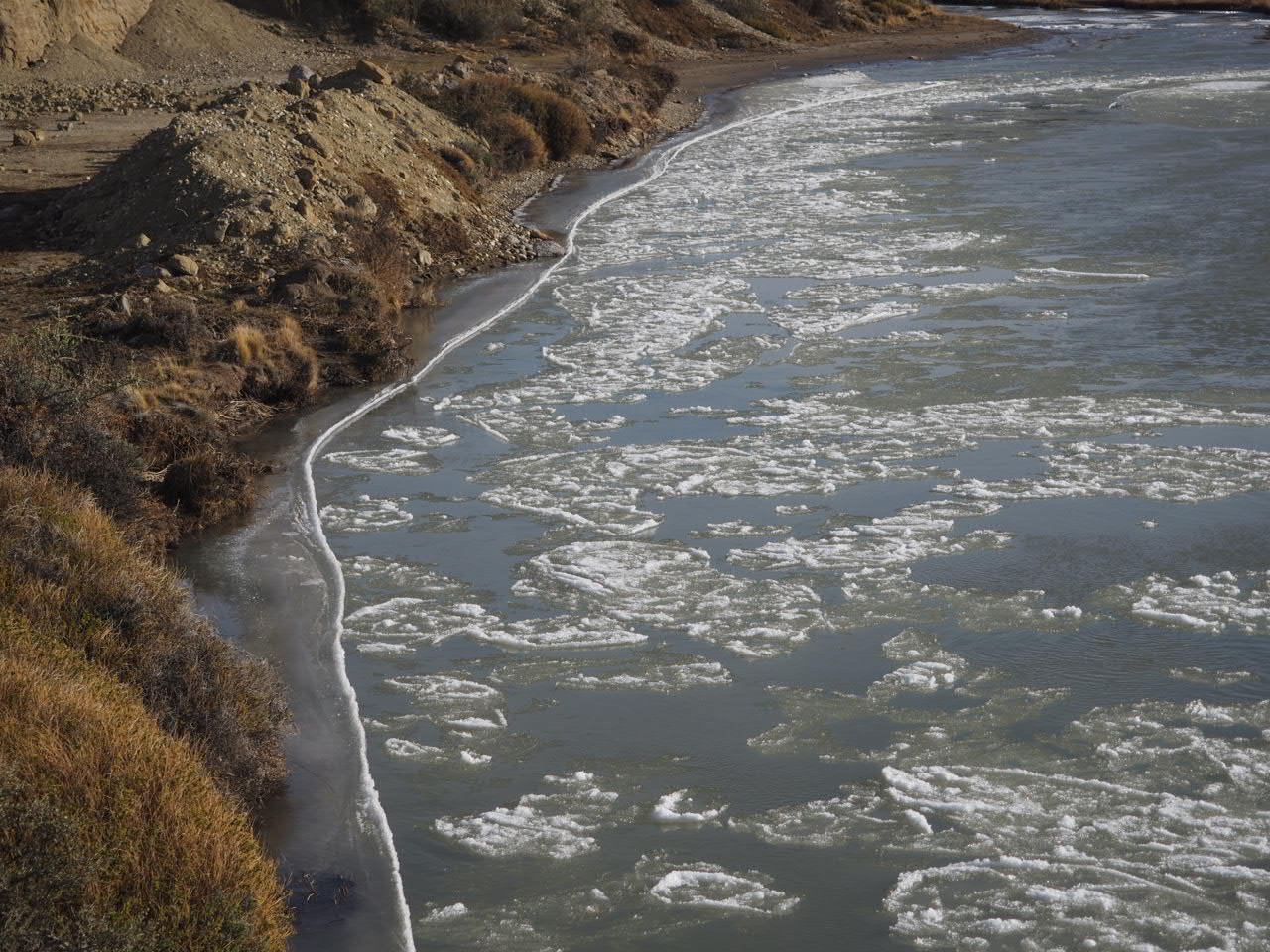 Heading out of Gobernador Gregores, ice and snow casually float down river like it’s no big thing. 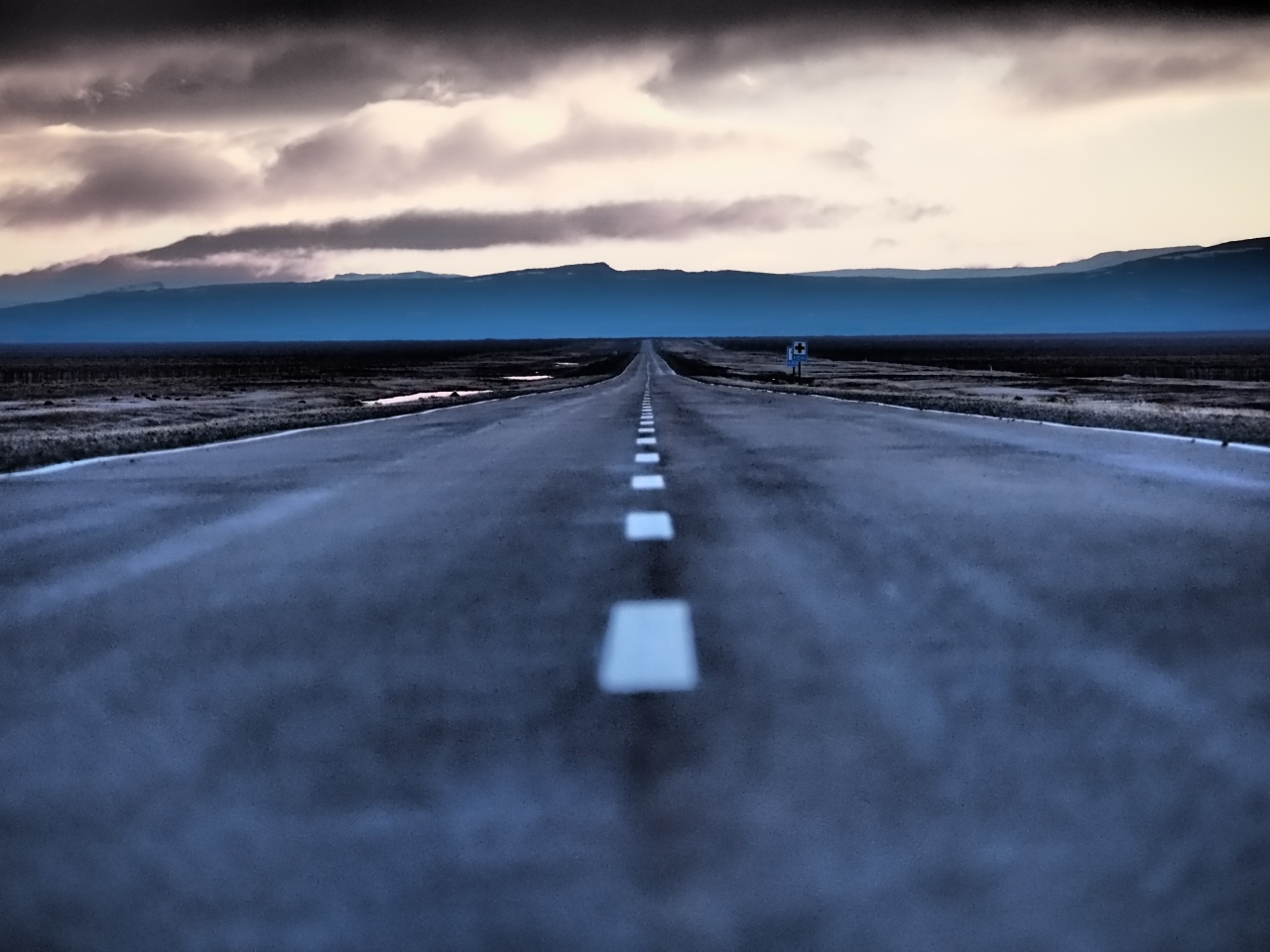 After some undulations, the road flattens out and a hint of a headwind offers an unpleasant suggestion of what’s to come.  A late start has me fall way short of a known shelter… 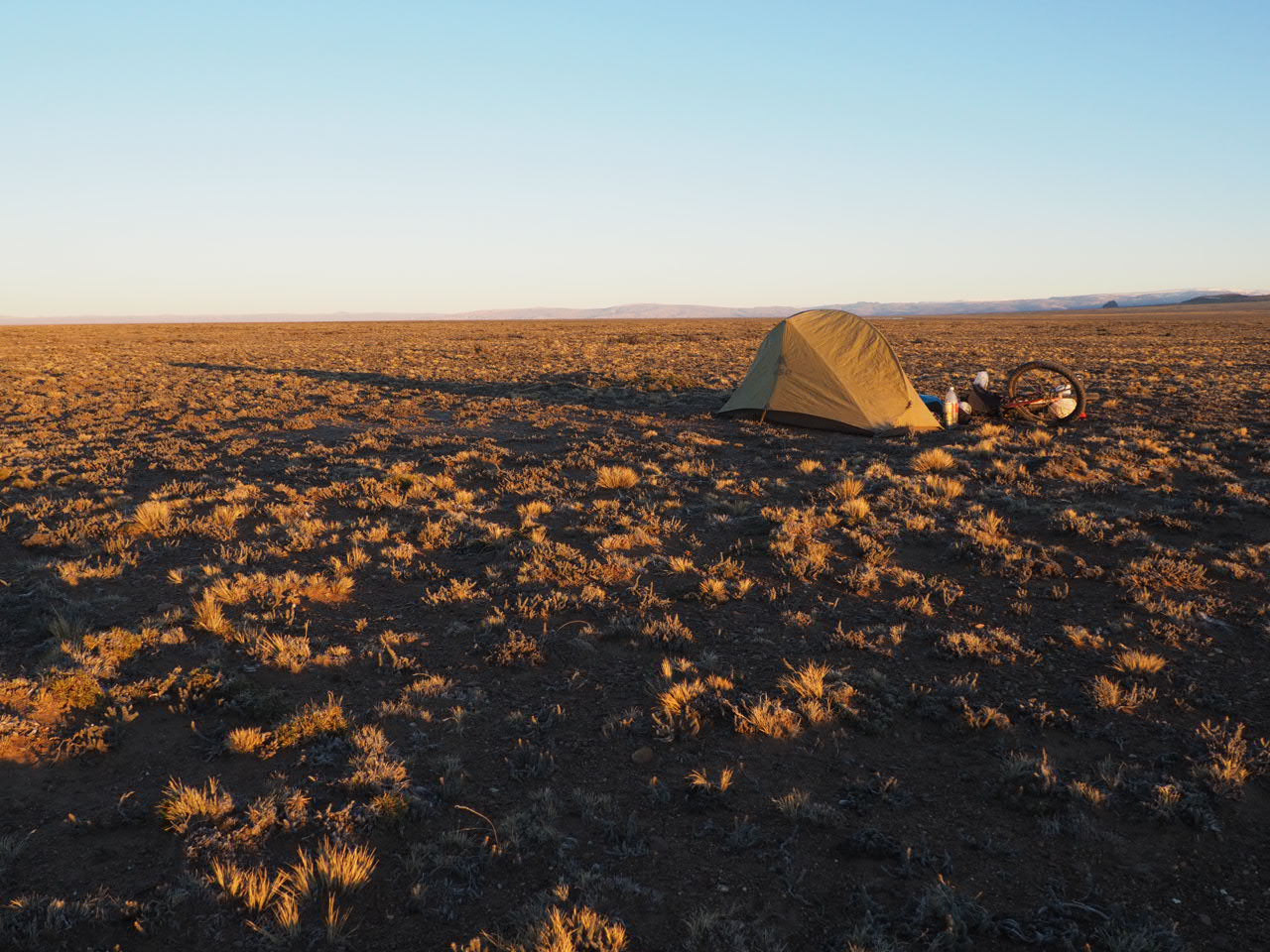 I find myself camping in the middle of the open pampa.  Completely at the mercy of nature I am fortunate enough to experience a windless night. The temperatures however drop to what feels like well below -10C. It’s a poor night of sleep and I wake with a mild fever.

The wind cranks up to a gale force headwind the next day and the freezing windchill factor gives me a real sense of vulnerability on the unprotected plains. In my feverish state, it’s too cold to stop and rest in the biting wind. 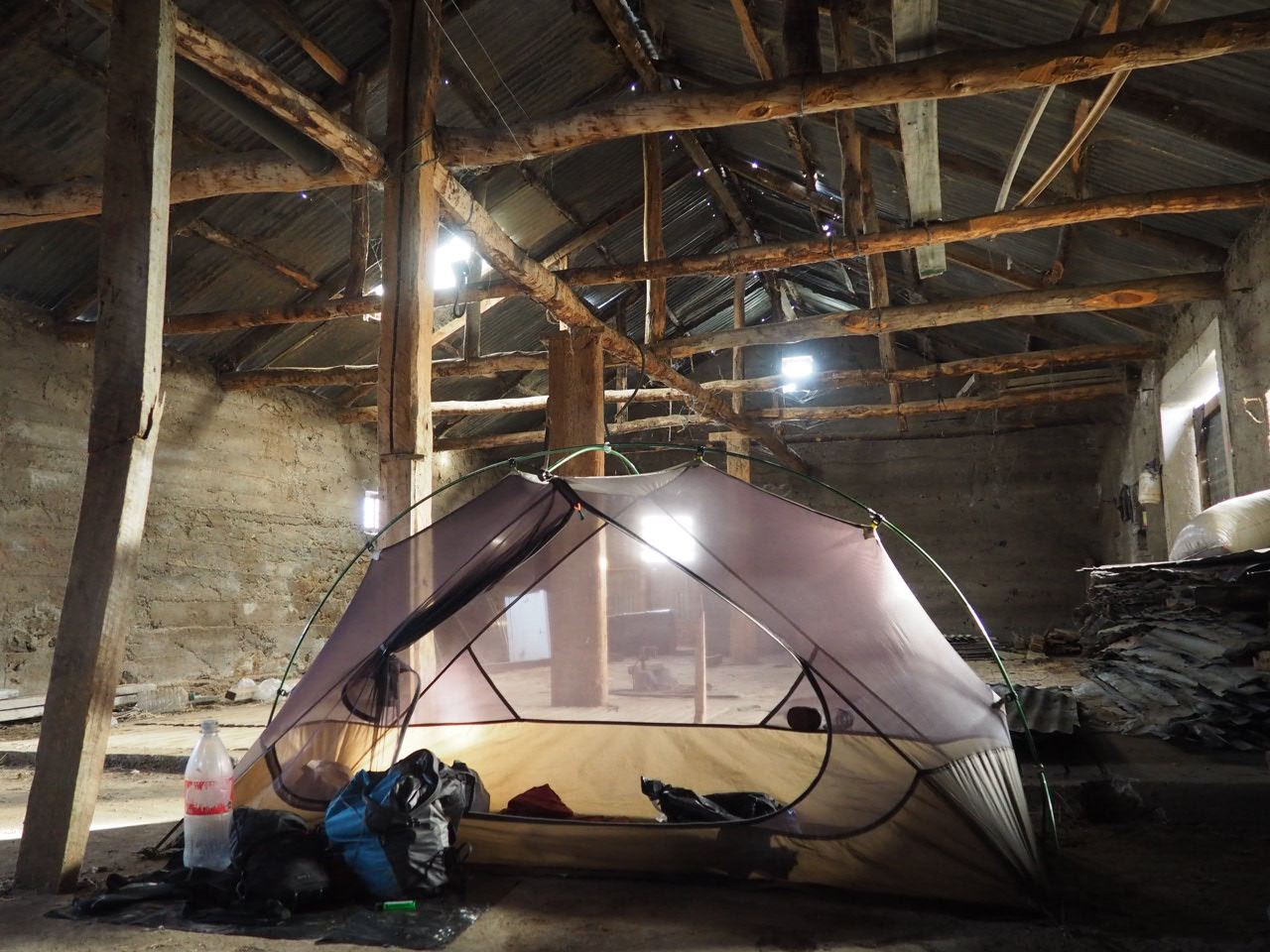 So, after some incredibly laborious riding, I am relieved to find shelter for the night at an estancia (farm). 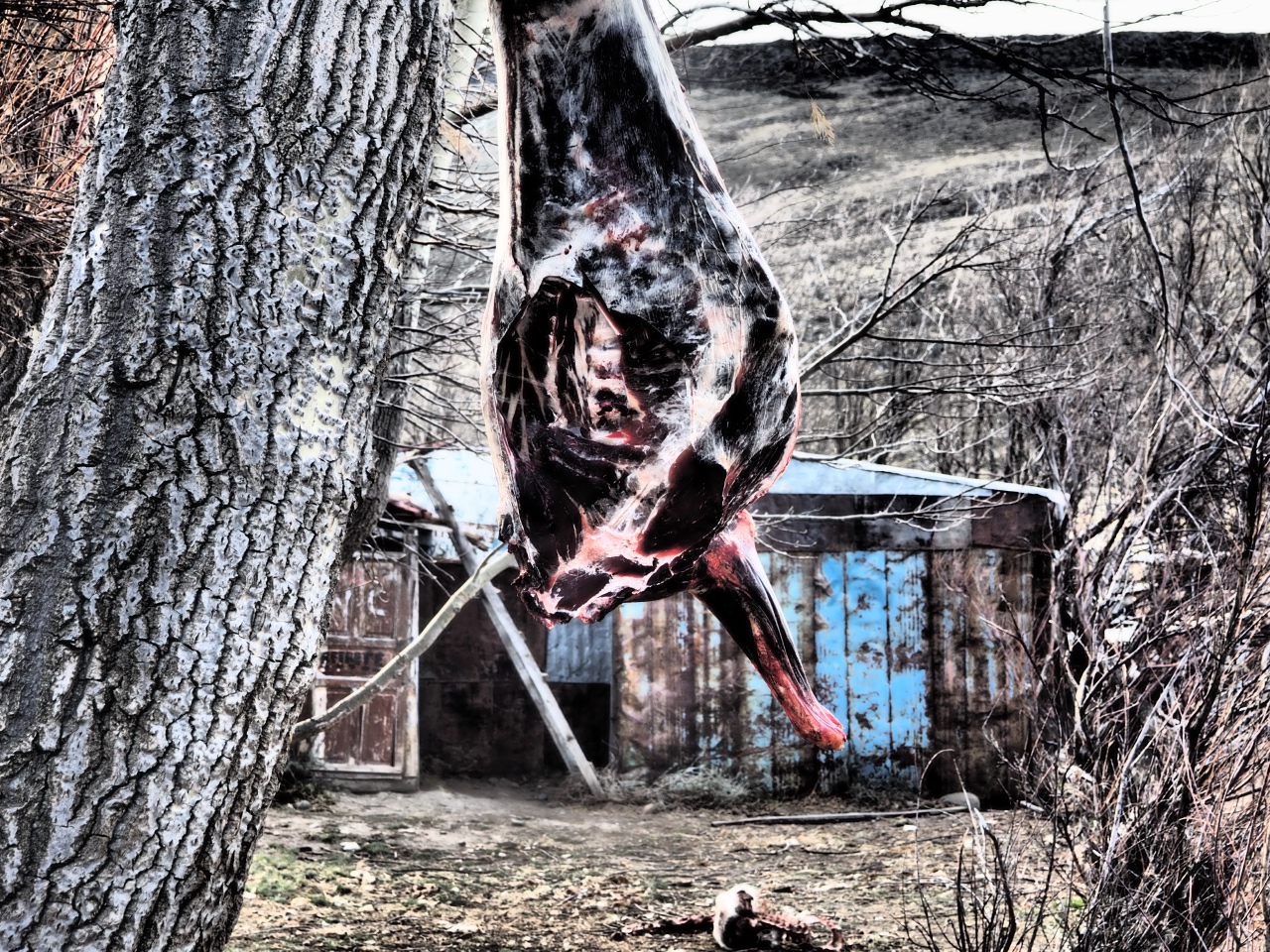 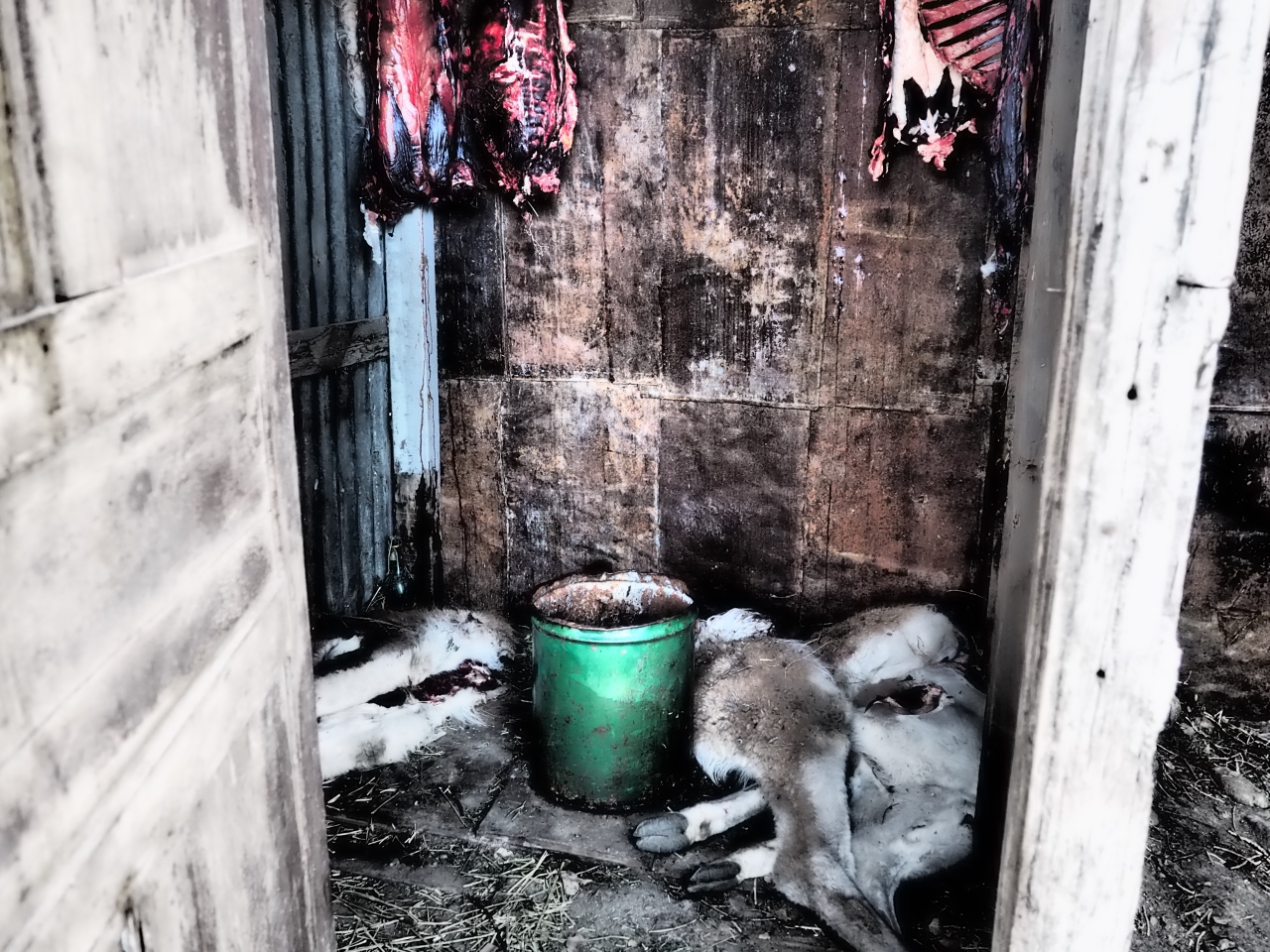 Their pantry is clearly overflowing and I am forced to share intimate moments with the hind legs of some rather unfortunate guanacos.  I resist the temptation to carve off a slice. 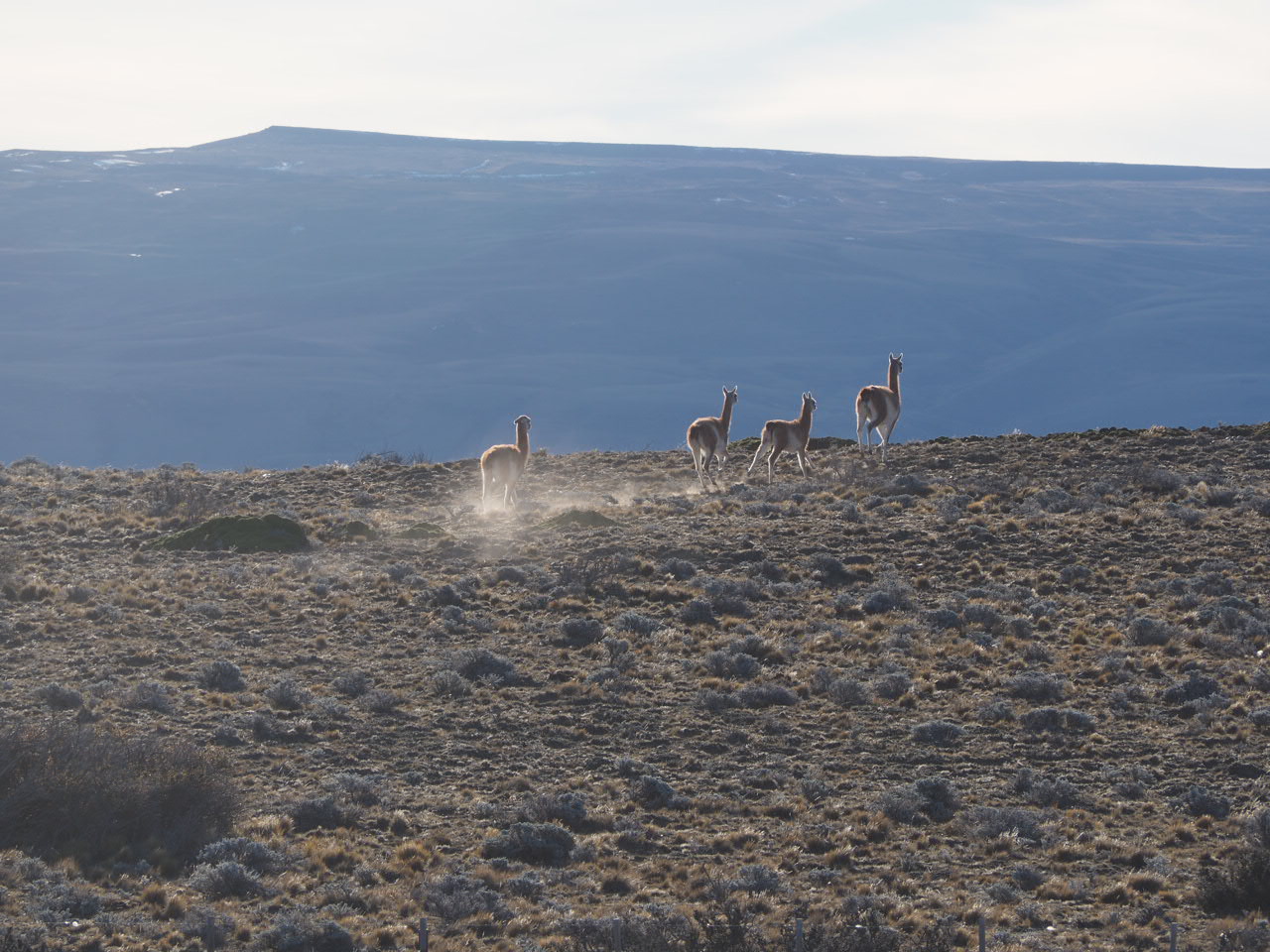 Not wanting to end up in a rustic toilet, these animals are understandably timid creatures with a strong herd mentality.  Coming across large groups on the windy pampa is a regular occurrence. 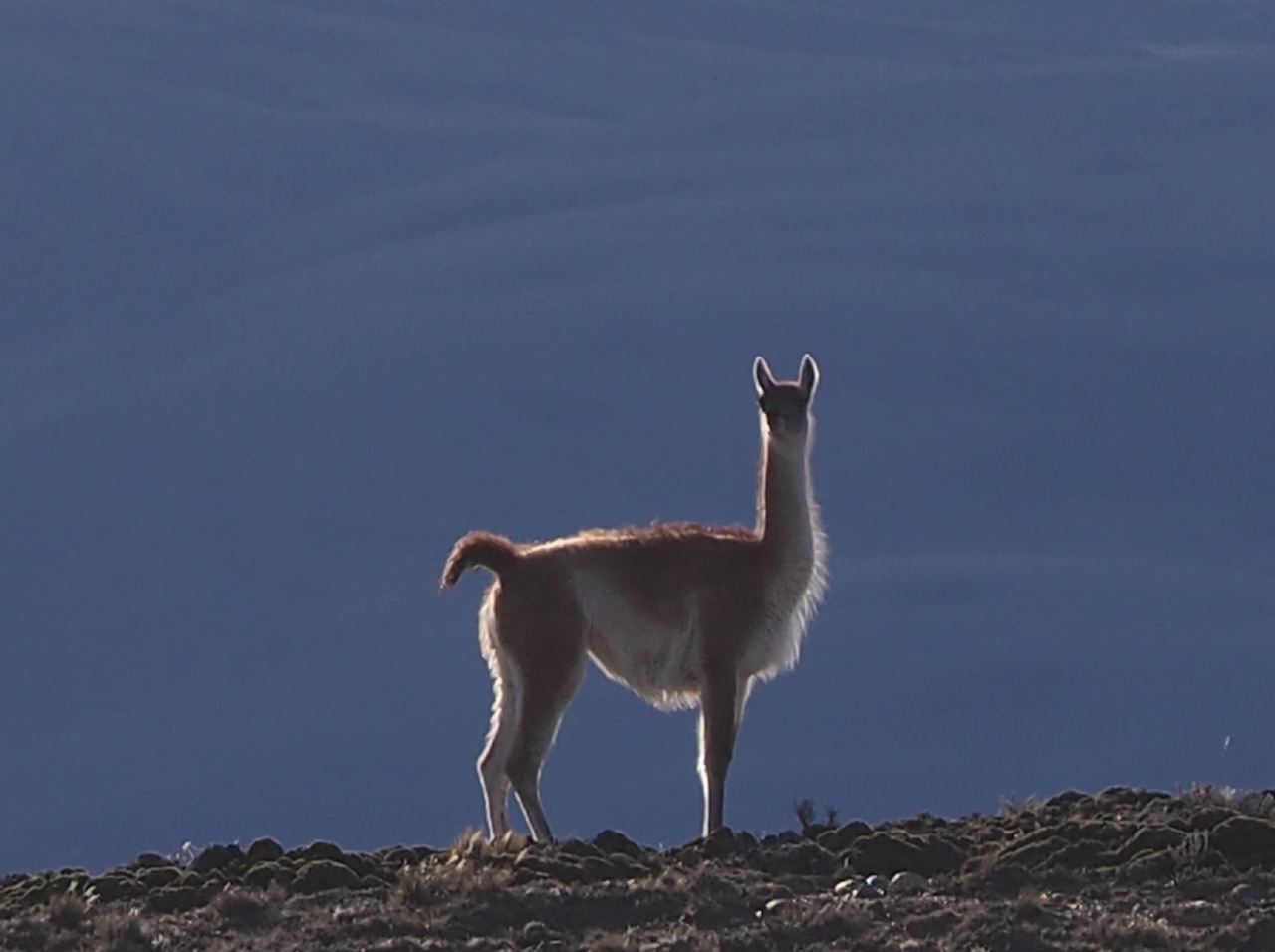 Normally the alpha male feels the need to demonstrate his fearlessness in front of the ladies.  Although I’m not even sure this is one.  Recognise the back legs? 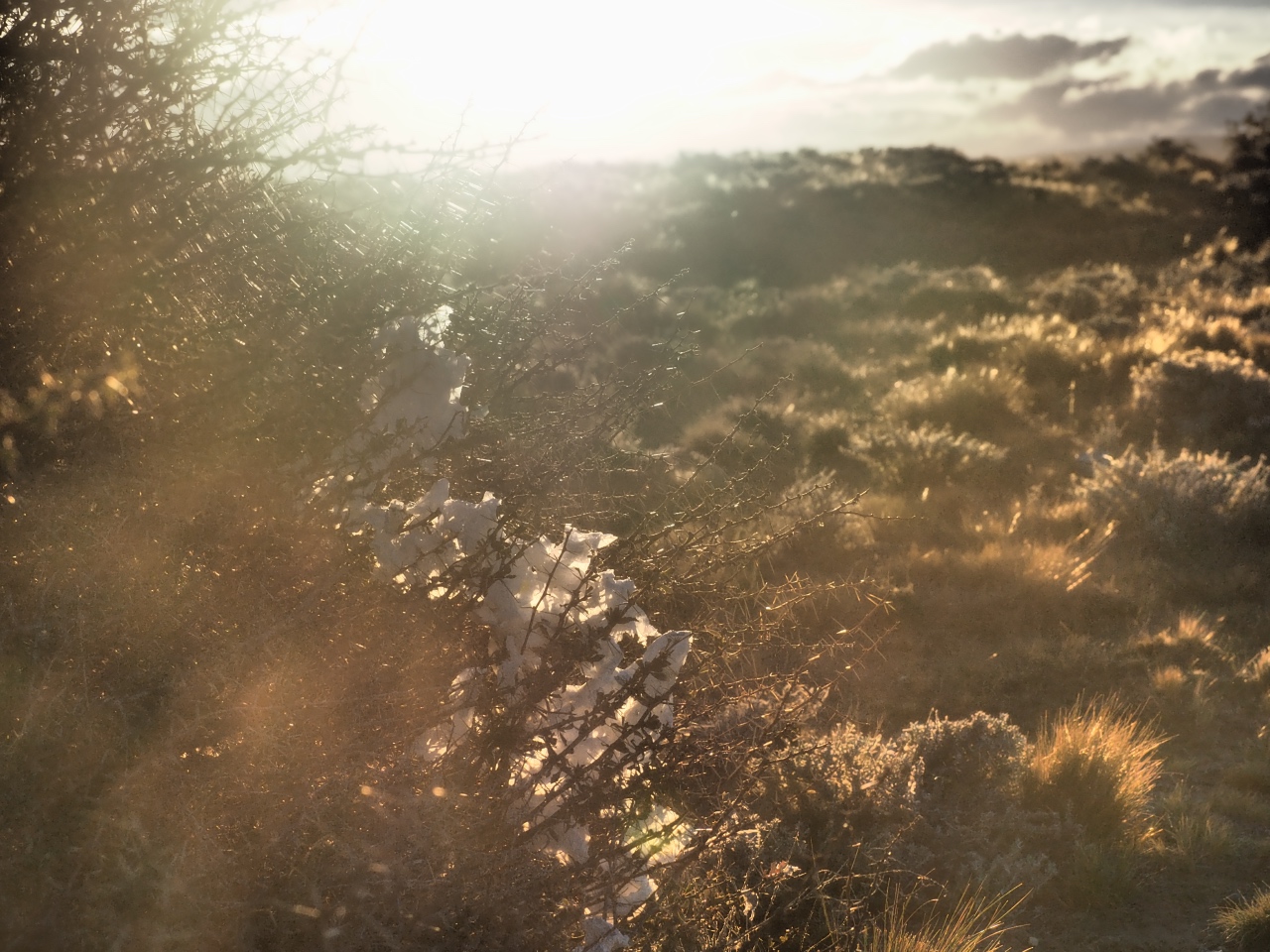 At the junction to El Chalten I decide to hitch a ride, It’s a 90km dead end and I’m not a fan of cycling the same stretch twice.  Hours pass and the sun dips rapidly towards the horizon so I start considering camping options. The only site with some vague wind protection is next to a vast amount of toilet paper… 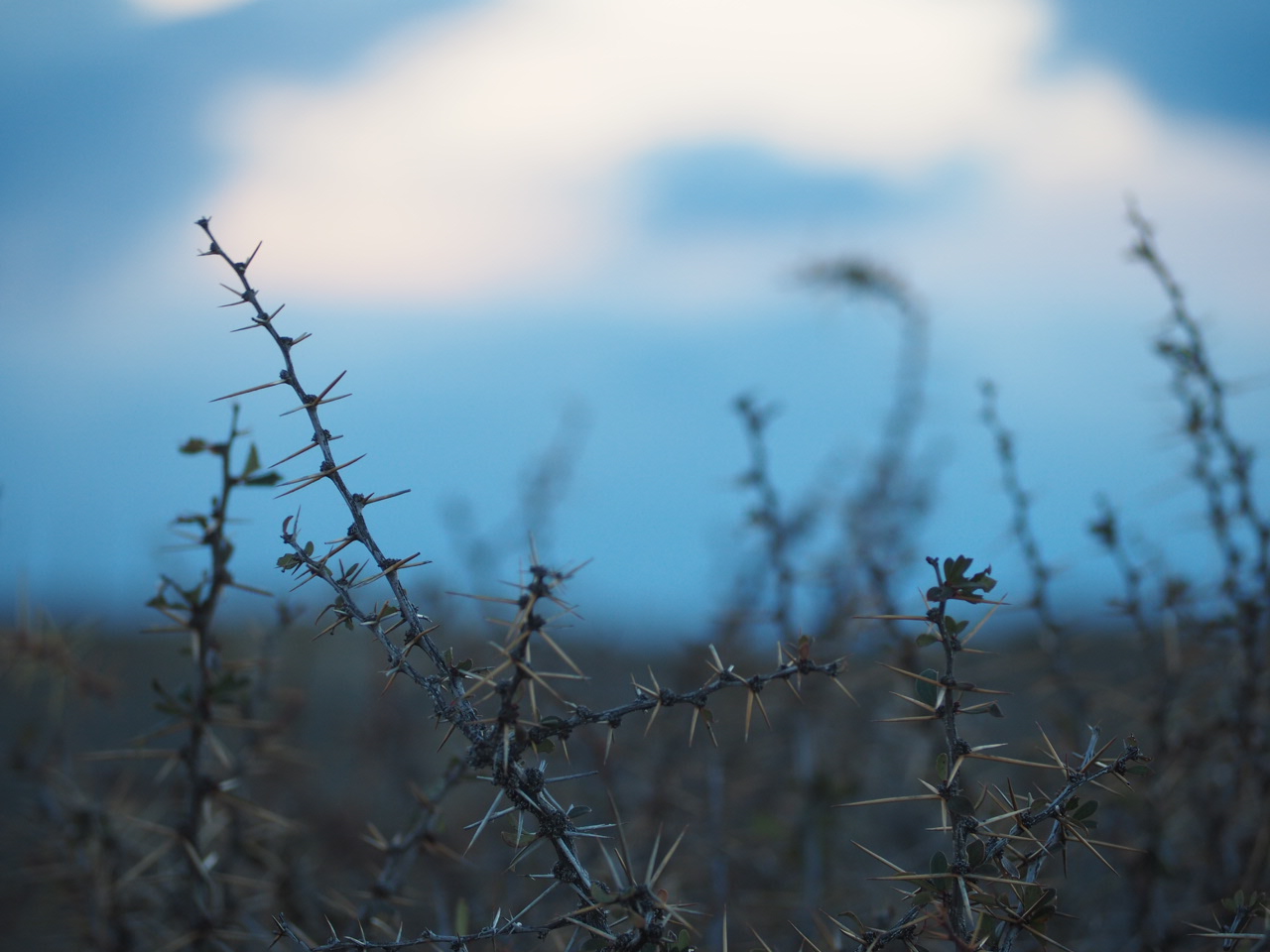 …nestled in a rather gnarly looking thorn bush 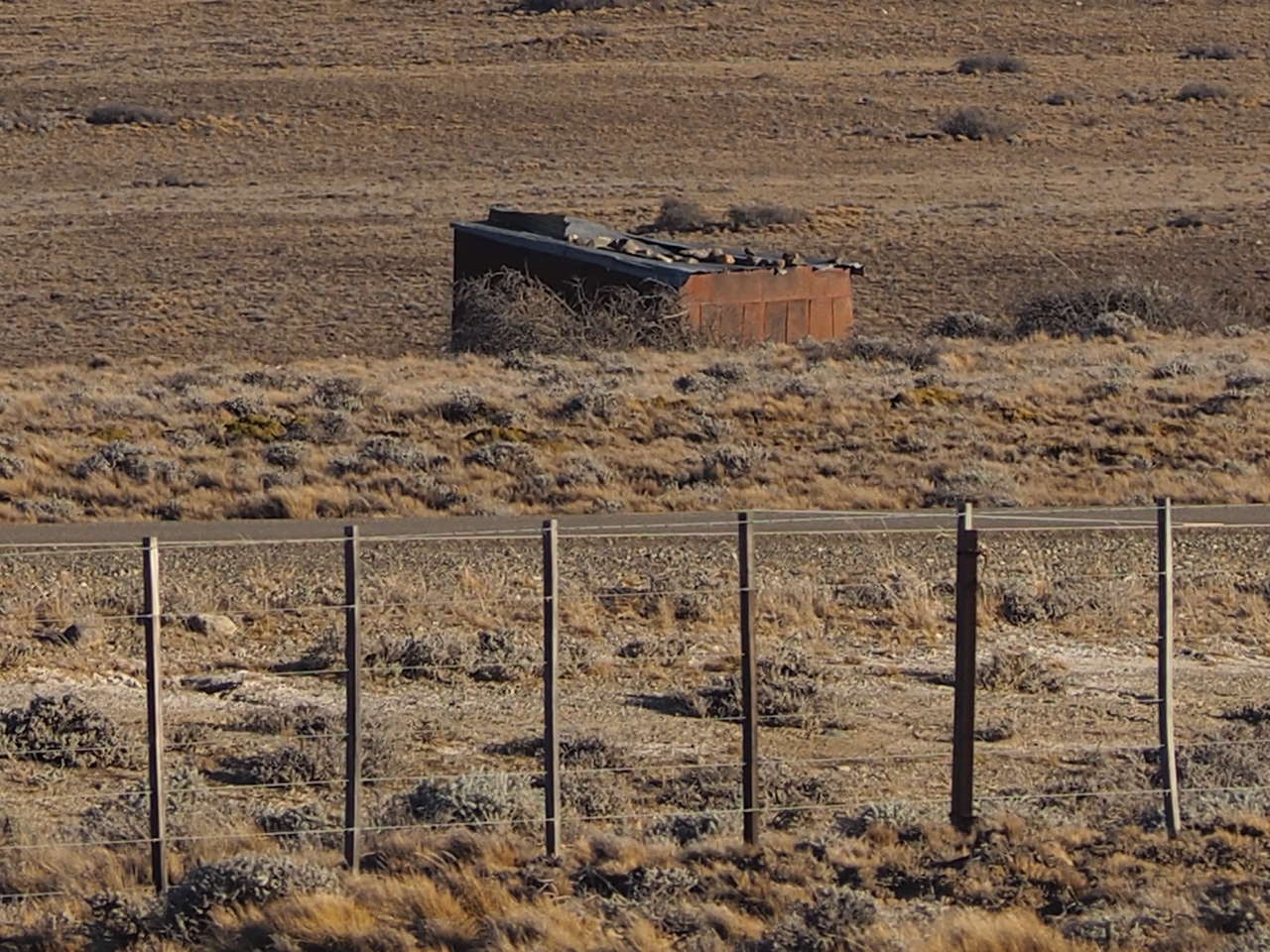 Using my zoom lens, however, I manage to spot a distant hut that requires only a small leap of a fence. 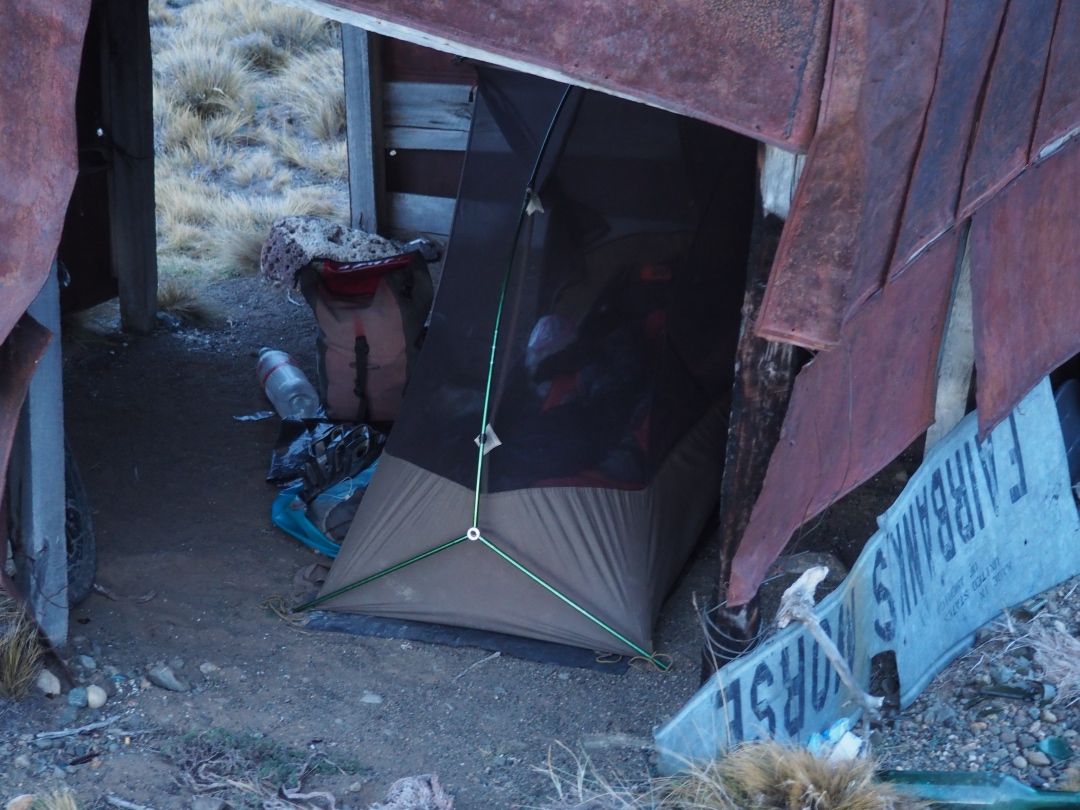 “Fairbanks Morse”. It has a rather US army feel to it and I unsuccessfully ponder the reason of its existence. 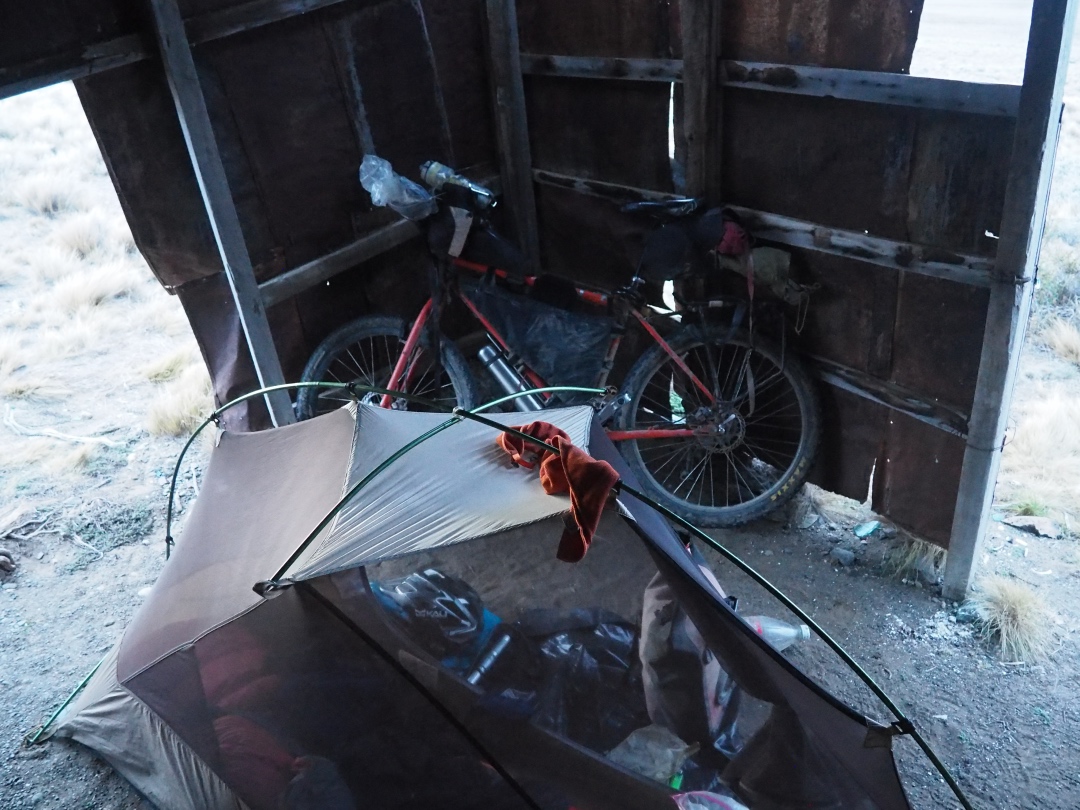 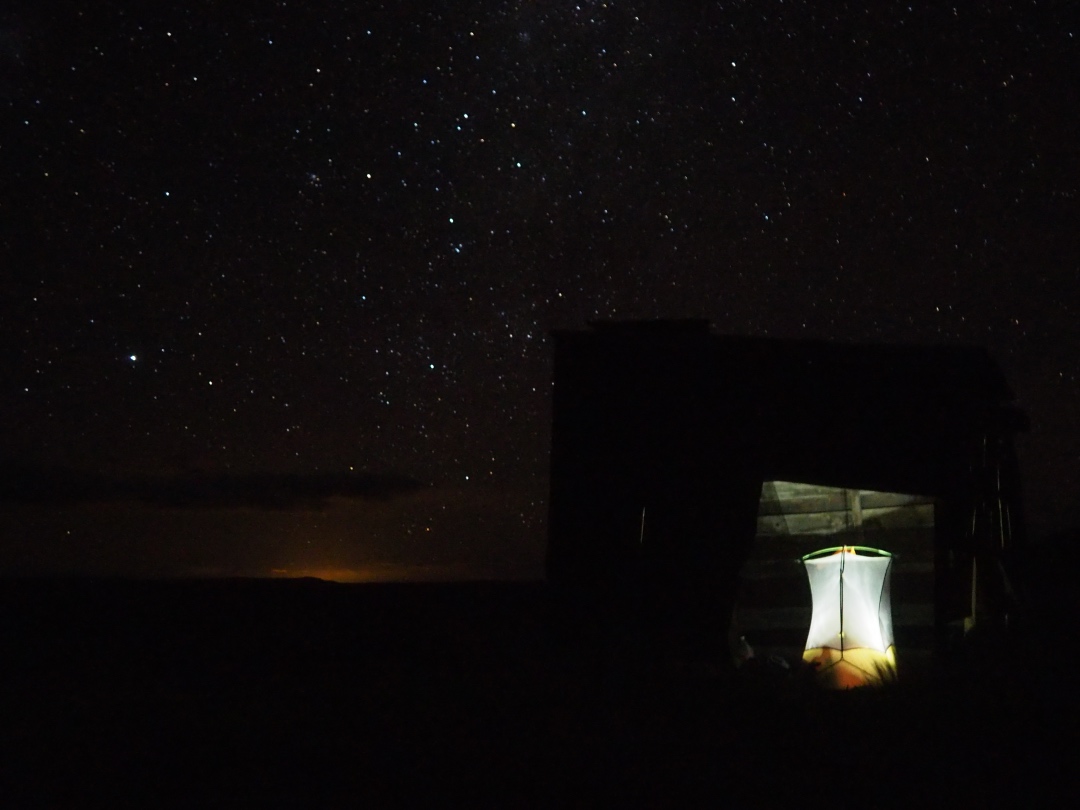 Some kind of dubious aurora effect on the horizon has me playing around on my camera with some night photgraphy.

The roof of the hut clangs all night in the excessive winds giving me the irrational sensation it could collapse any minute. This unfortunately results in a poor night of sleep in an otherwise pleasant little shelter.

The next morning I quickly pick up a ride to El Chalten after cycling the first five kilometres.

Next: hiking to Fitzroy and Cerro Torre.

Route: Just follow the main road that has minimal traffic.