Due to the fact that I’m crossing half the world on my bicycle, the number of potential attractions and places to visit that I pass sometimes feels painfully high.  Keen to make progress south, it’s always hard to decide whether it’s worth the time and effort to detour. Invariably it is, what would I be rushing to after all? Finish my trip faster so I can then…what?  It seems that we are raised in the Western world to believe everything we do should be done as fast as possible.  But for what exactly?  More is not necessarily better.  It’s all context dependent.  For me the bicycle is partly a vehicle to open myself up to serendipity and opportunity. Life’s greatest experiences and opportunities often come from the unexpected and unplanned.  We just need to find and do activities that expose us to these positive ‘black swans’ (see Nassim Nicholas Taleb – the expert on this matter).  We must be flexible with our plans and open to the unexpected and have the wisdom to recognise which opportunities to seize.  Bicycle touring is not the only way to achieve this but it’s certainly a good one.

After finally leaving San Agustin, my current 1st world decision problem was whether or not to visit the ‘Cuevas de los Guacharos’, a national park in the southeast of Huila.  The annual gringo count is relatively low in this park due to its lack of publicity and relative awkwardness to get to. This actually made it more appealing to me, locals are invariably less tourist weary and the cost of travel isn’t overly-inflated.  My previous warmshowers.com host from Bogota (Javier) had insisted that it was worth the visit.  But I had wanted to ‘get on with my trip’ (it feels like I’ve been in Colombia for AGES – partly because I have) and decided to skip it the morning that I left San Agustin.  As I descended towards the hotter lowlands of Pitalito I pondered over my decision and ended up changing my plan.  After all, there was a good chance I’ve never be this close again in my life.  Some say it’s best to stick with a decision, sometimes this is the case but I prefer to be less rigid; let’s not miss the black swans.

After a reasonable descent, I chose the back road via Bruselas towards Palestina since it meant I could avoid the city of Pitalito (cities and bicycles aren’t my favourite). I congratulated myself on my decision as the quite dirt road wove in and out of coffee fields and Colombian farmland (of which I have seen A LOT since Bogota), happy not to be sharing the road with heavy pieces of metal machinery except for the odd motorbike.  The locals said there were no delinquency problems  (“sí, es sano aqui”). 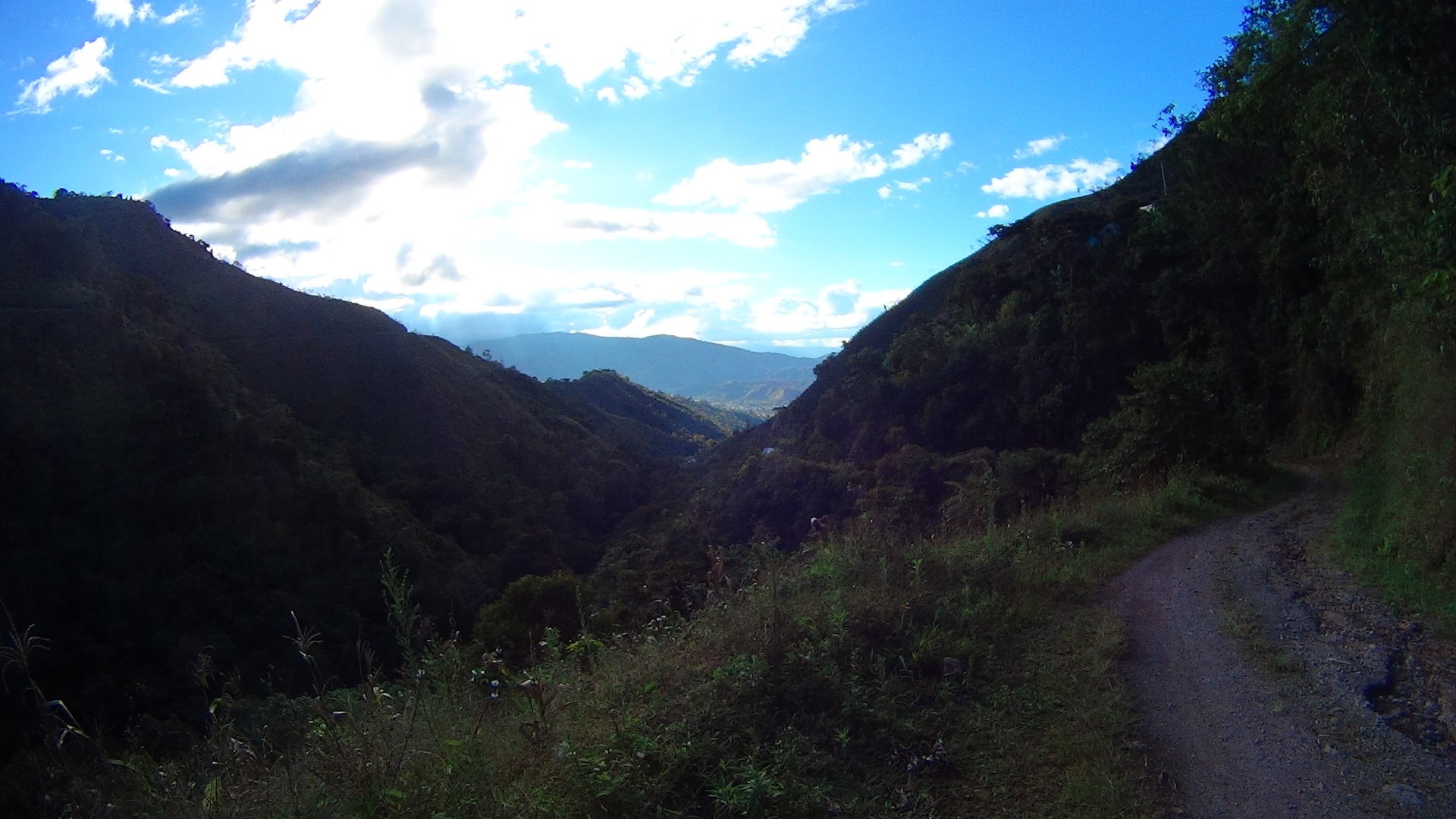 The terrain proved to be particularly steep after Bruselas but I felt strong and thoroughly enjoyed it. 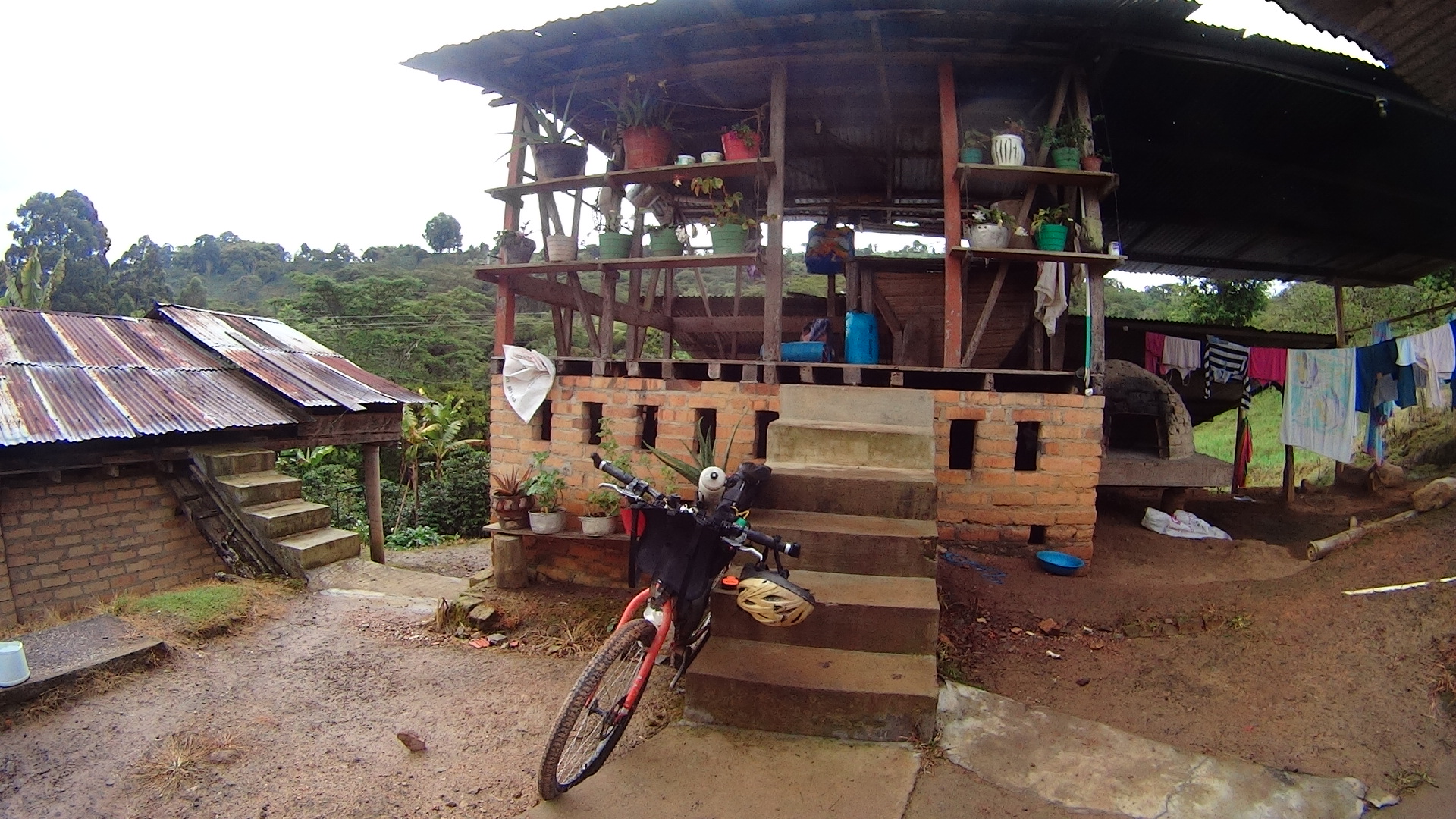 Looking for a place to camp in Palestina, a suggestion from a couple of passing motocyclists had me knocking on the door of someone’s farm.  I found myself camping under this roof for the night.

After a good night’s sleep in Marta’s farm I got supplies in Palestina the next morning. (Note: an excellent place to stay that I wasn’t aware of when I arrived is Finca El Encanto two kilometres out of town towards the park; I stayed there on my return). The rain poured down and I sat in a cafe gulping down my soup and plate of eggs and rice.  I knew the hike up to the National Park would be very muddy and was wondering whether going was the right decision; having wet feet for a several days and destroying my shoes wasn’t part of my plan.  I’d worn them out enough on my hike to Laguna de Magdalena the week before.

The rain eventually cleared and I cycled off towards La Mensura.  The unpaved road climbed steeply for a couple of hours and I felt a little queasy from the exertion on arrival at the finca of Belisario. I rested for an hour before hiking off into the park. 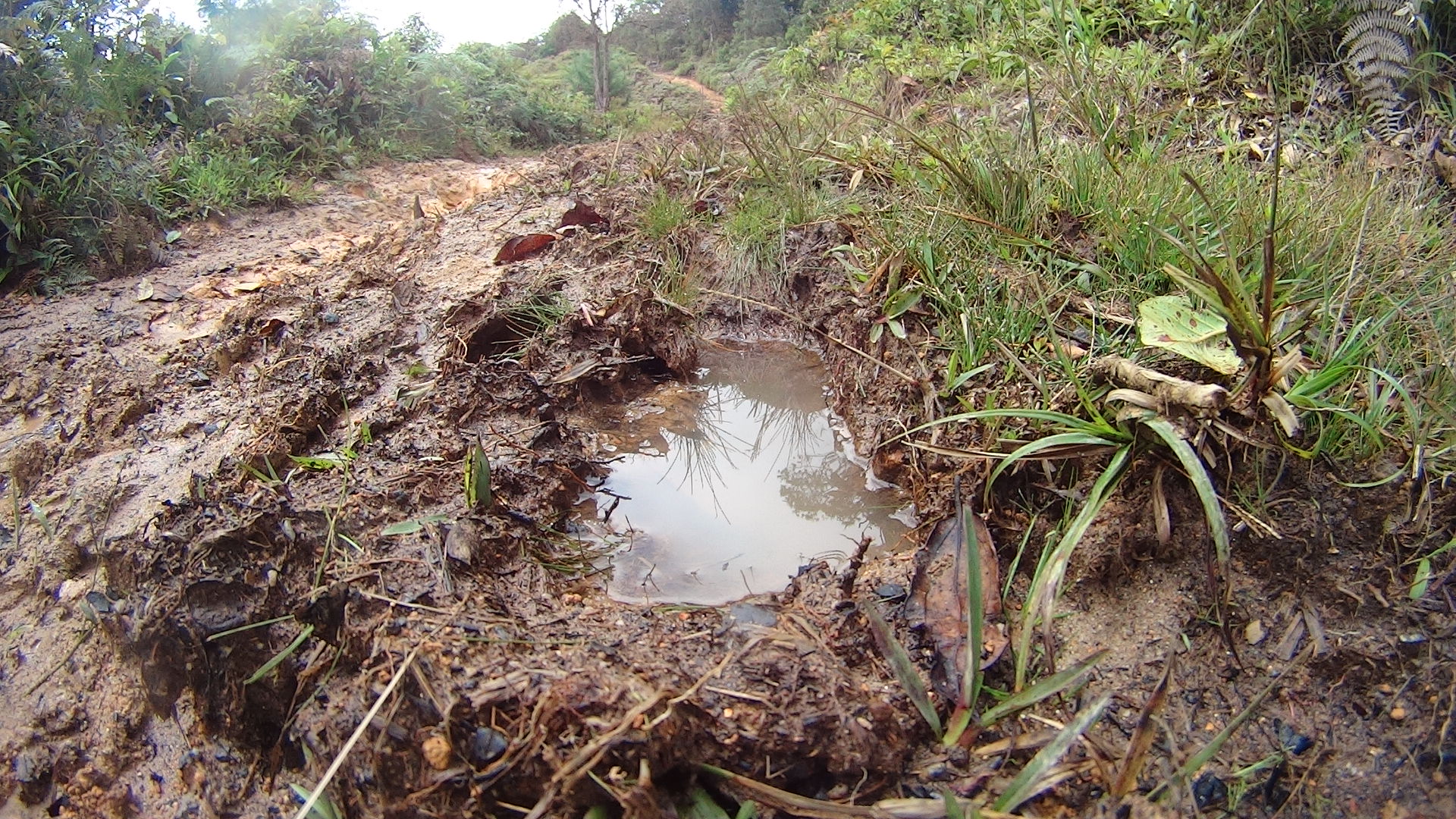 There was a lot of mud!  Taking the bike further than Belisario would not be worth the effort.  Tears and pangs of regret would be forming shortly after.  (In raining season at least)

Slipping and sliding up and down the hills at a reasonable pace, I arrived in Cedros (the park’s central office and accommodation) under three hours later passing another group on the way  (who turned out to be a lot of fun; two out of three were girls – always nice to have girls on a trip where you expect to see no one except a (male) park official).  I slept on the floor on a mattress in a cabin (COP8000 per night).  The entrance fee was COP37,000 for foreigners or COP8000 for nationals.  I sort of understand the difference in charging locals a subsidised fee and it’s probably fair; but I wondered to myself if they end up making less since it could dissuade poorer travellers from going there.  (They’re considering dropping the cost and anyway it’s totally worth it, so don’t let it put you off if you can afford it).

Unsurprisingly there are numerous caves in ‘Caves of the Nightingales’ (at least I think that’s the translation of the South American bird ‘guácharo’).  The park official (Carlos) was awesome and took us about a kilometre into one of them (Cueva de Indio)  which had amazing rock formations such as stalactites and stalagnites.   Part of which involved crawling on our hands and knees for about 60 metres through a very narrow tunnel.  Somewhat intense.  One can’t help pondering on the odds of the cave collapsing at some stage but they seem pretty relaxed about it. 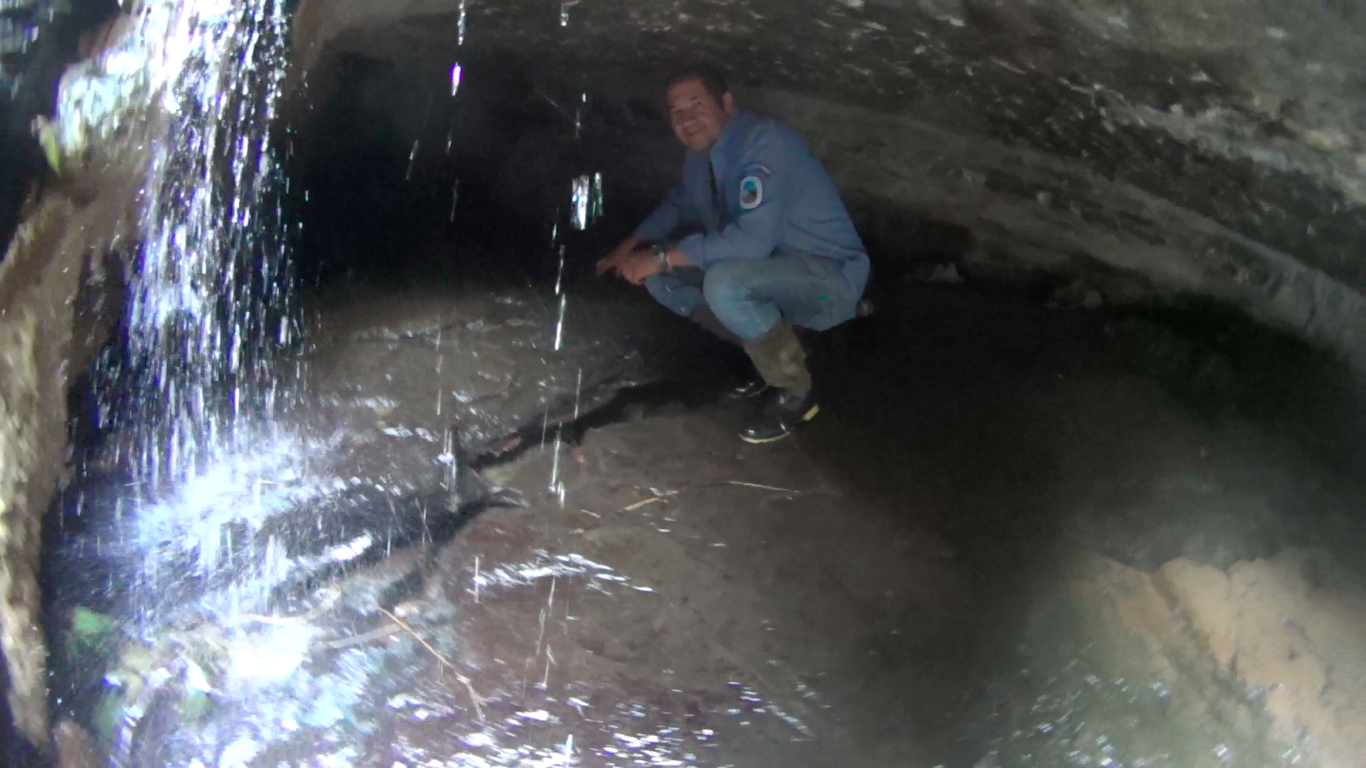 Carlos (our excellent guide) crouching in the entrance to Cueva de Indio, not ideal for someone of 6’4″  (me)

Stalactites, Cueva de Indio – lots of this sort of thing. 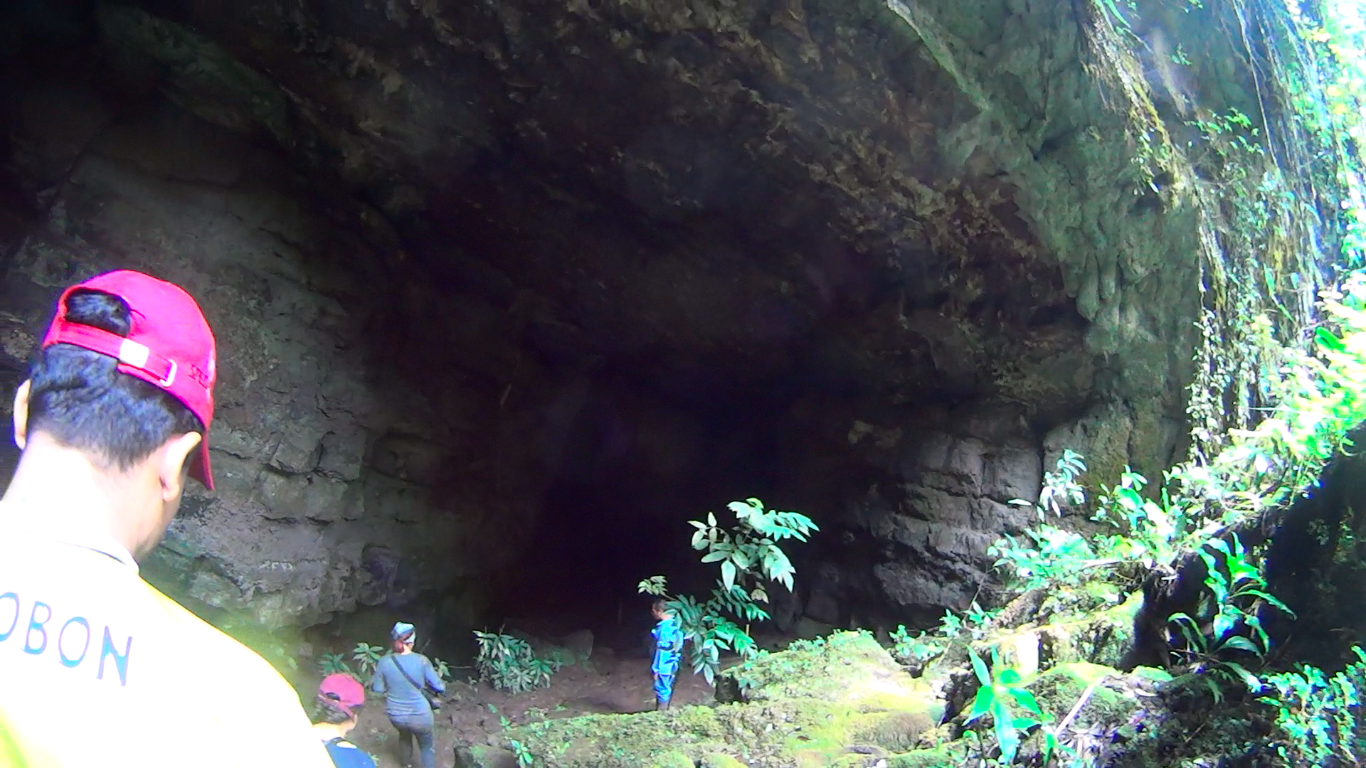 The third cave that we ventured into was the namesake of the park, Cueva de Los Guácharos. 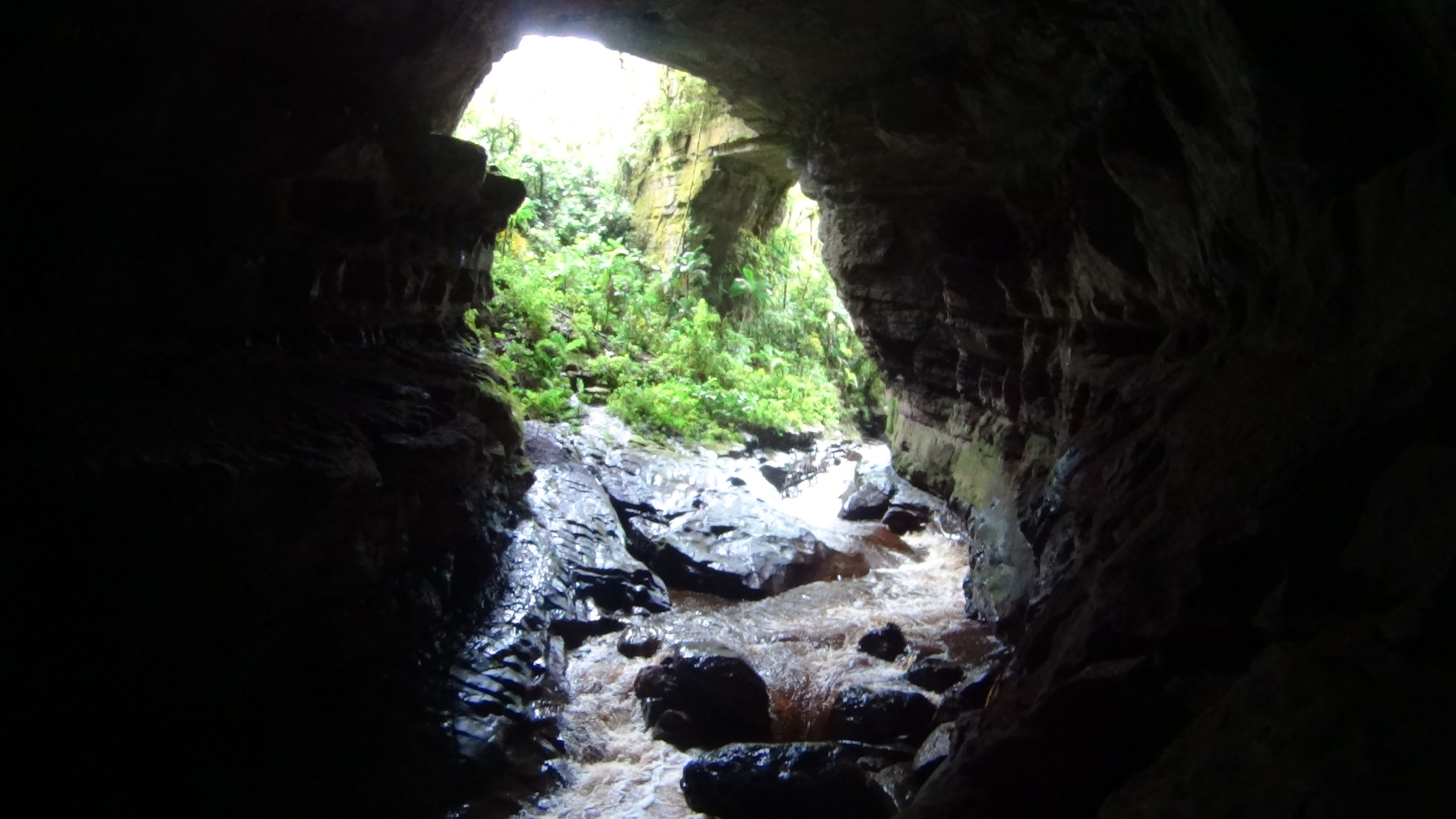 I estimate the height of the cave to be 60 metres, a huge cavern although not as deep like Cueva de Indio from what I saw; this beautiful river flowed through it.  At times this cave is packed with guacharos but we were there during the quiet stage of their cycle.  A couple of guacharos were visible to the eager eye sitting high up in their nests (too dark for my camera), perhaps not strong enough to leave; presumably with the best years behind them. 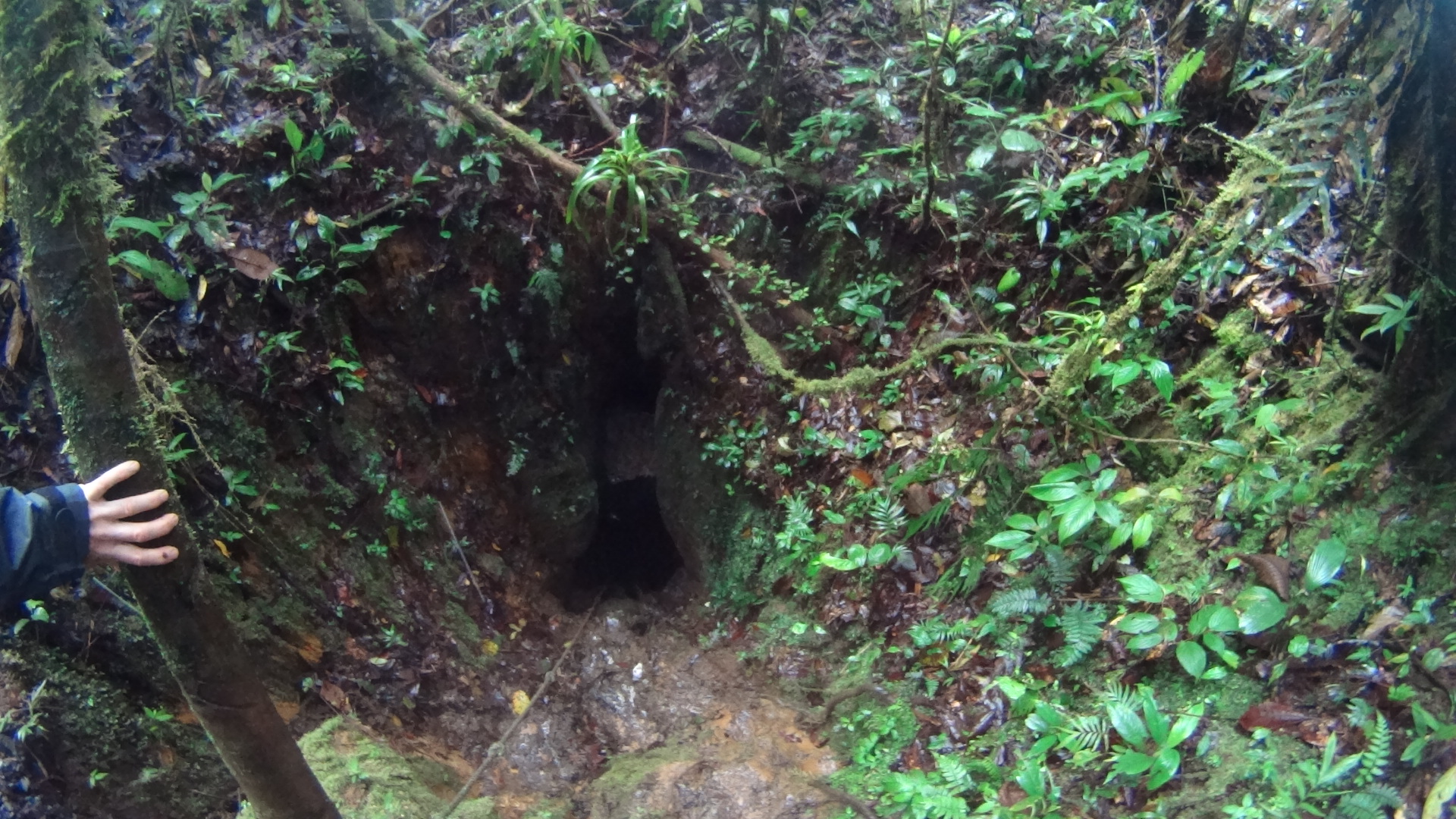 Cueva de Hoyo. This looking vertically straight down. Normally not part of the tour, and I could see why. The descent into this cave was somewhat sketchy. 40 metres descending using this rope. Very muddy and wet. Don’t take your grandmother down there. 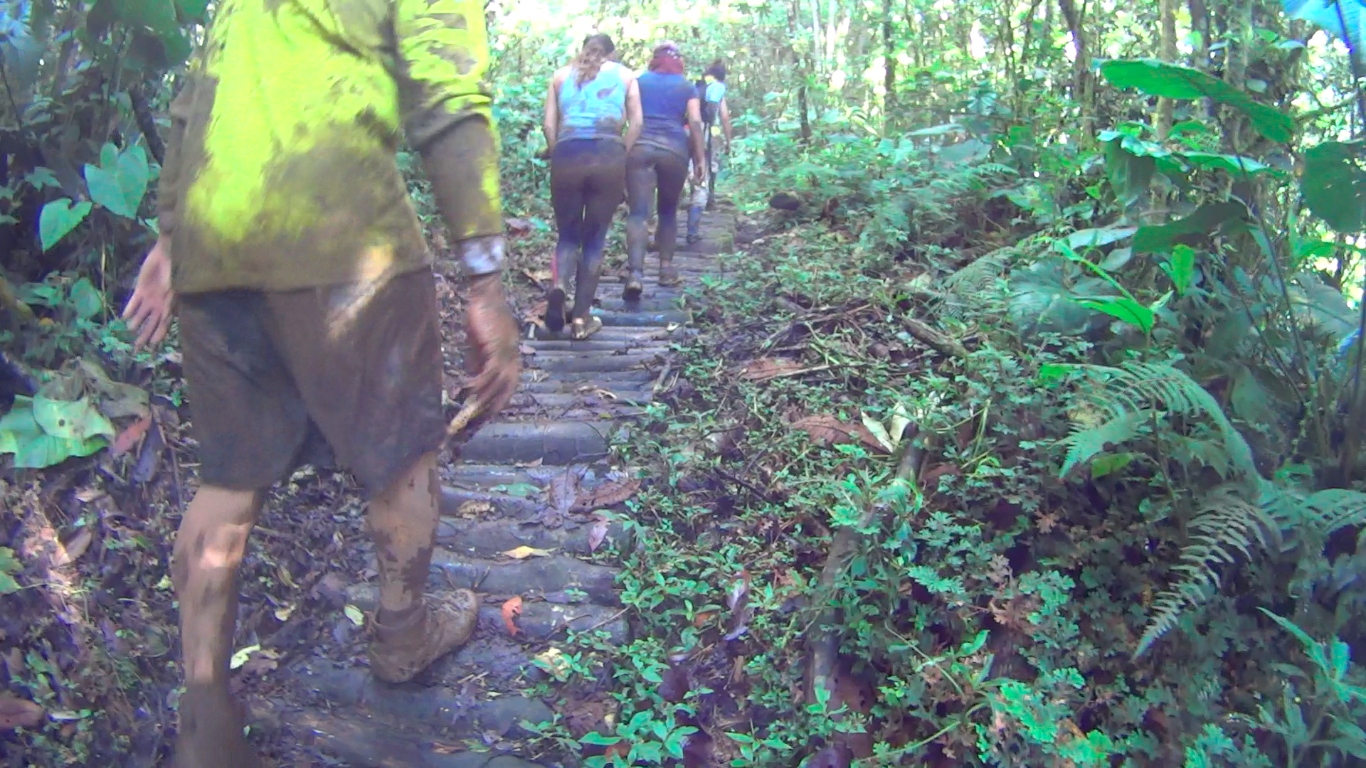 The unavoidable muddy behind…

Some video footage of the caves:

Two nights were sufficient to see most of caves; another waterfall (supposedly amazing) known as Lindosa is another 4 hour there and back hike.  I gave it a miss, I’d had enough of the mud (I’m told the route is fine in dry season).  On my way out, I entered Cueva de Cuadro on my own. After only about 40 metres I decided it would be best to leave, it was very eery in there.  Rather disturbingly I unwittingly found myself coming out of another exit.  It would be far too easy to lose oneself in these caves. I ventured back in afterwards for about 15 minutes and sat reasonably close to the entrance.  It was totally dark, I couldn’t see a single ‘pixel’ of light, an unusual feeling (for solo travel, two torches would be essential; with light failure, finding your way out would be extremely difficult).  I felt a connection with my ancestral routes and it was both calming and exhilarating at the same time; if that’s even possible. 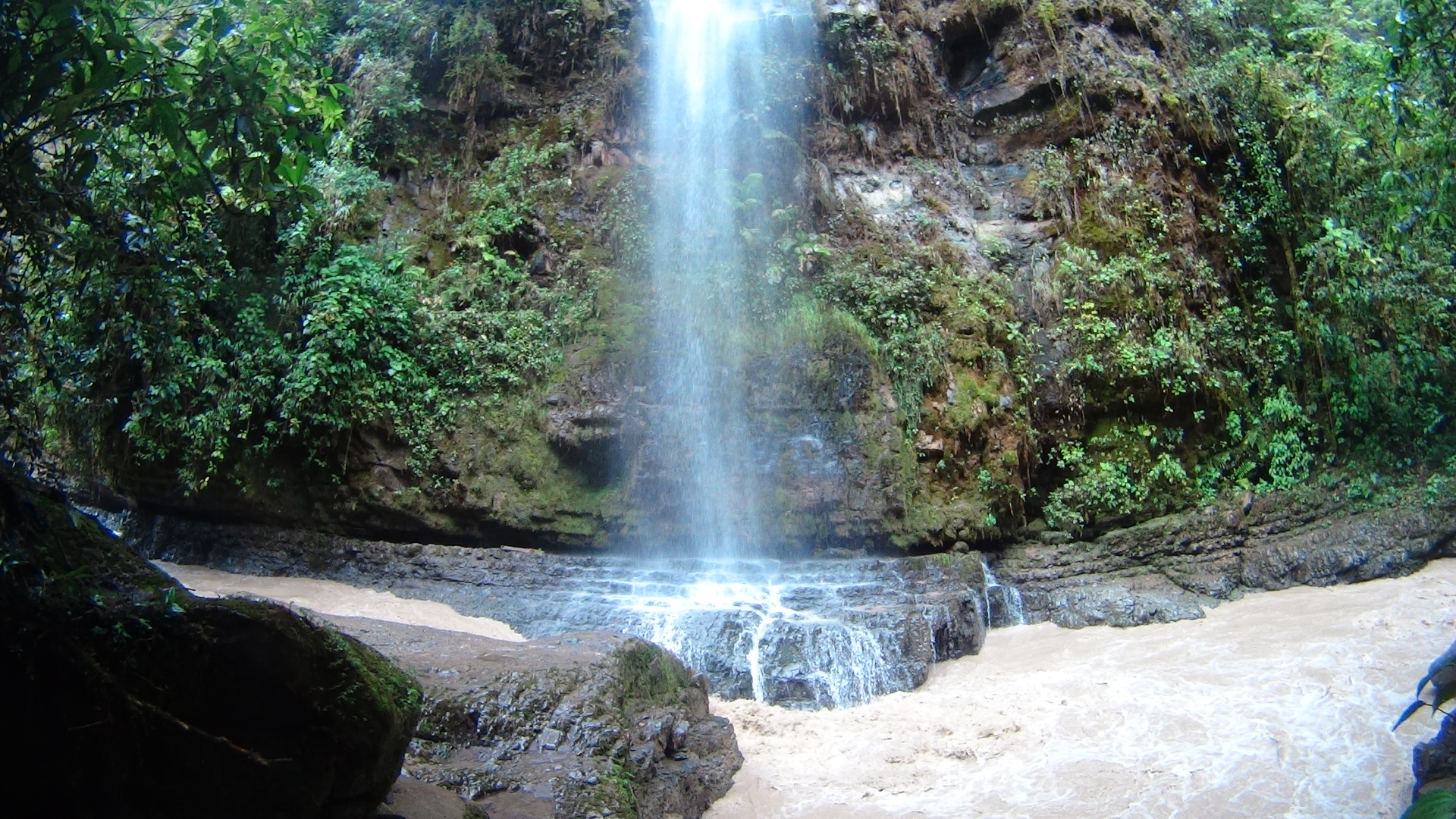 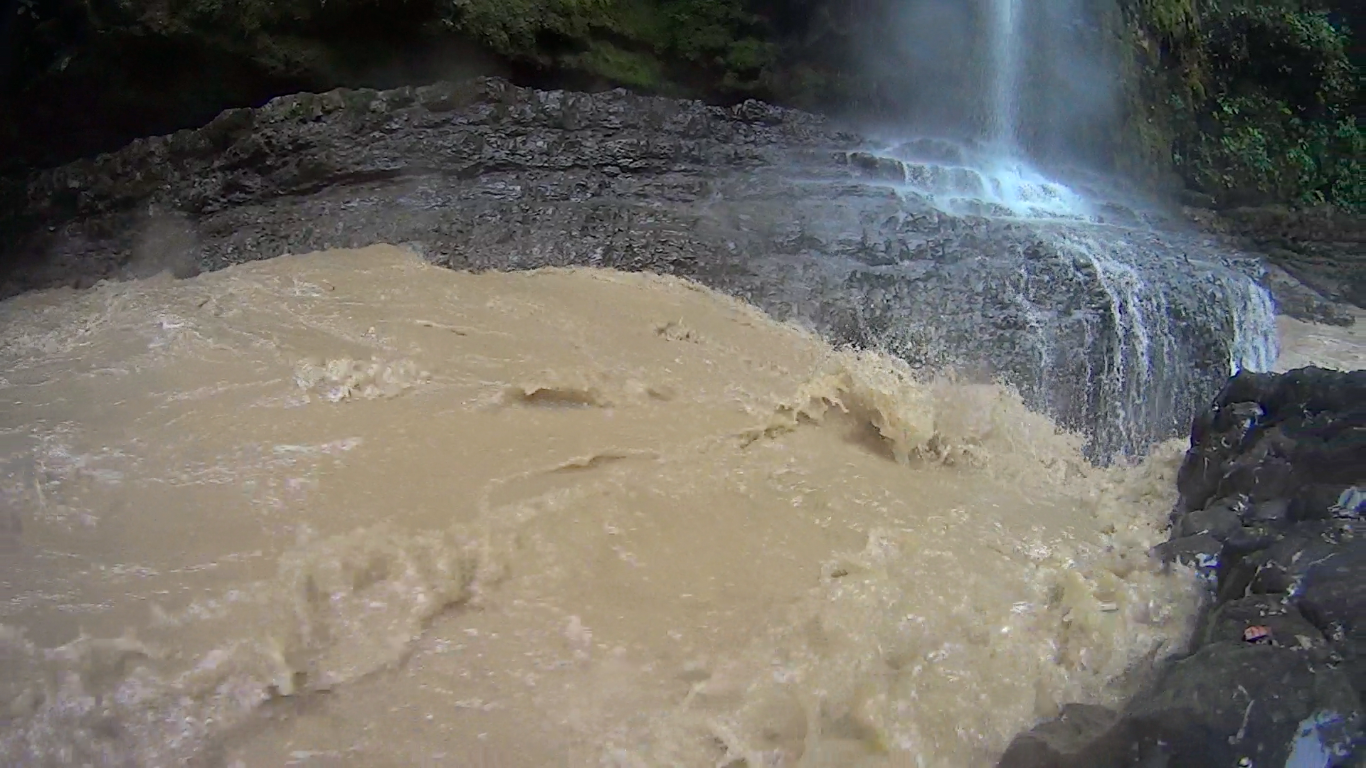 …this mesmerisingly brown fast flowing river. Don’t fall in there… 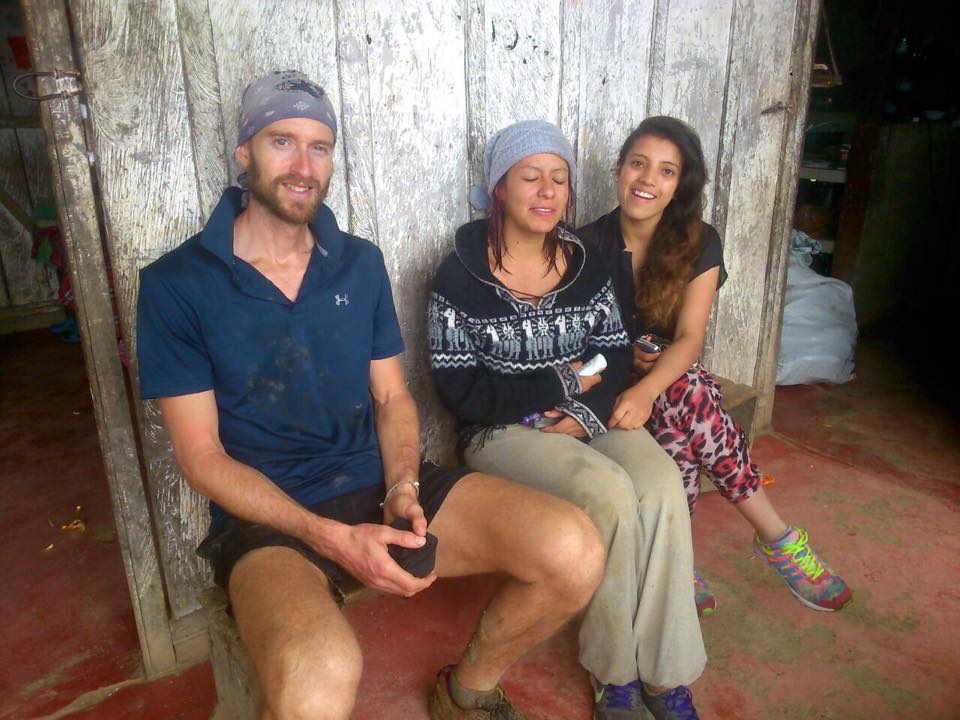 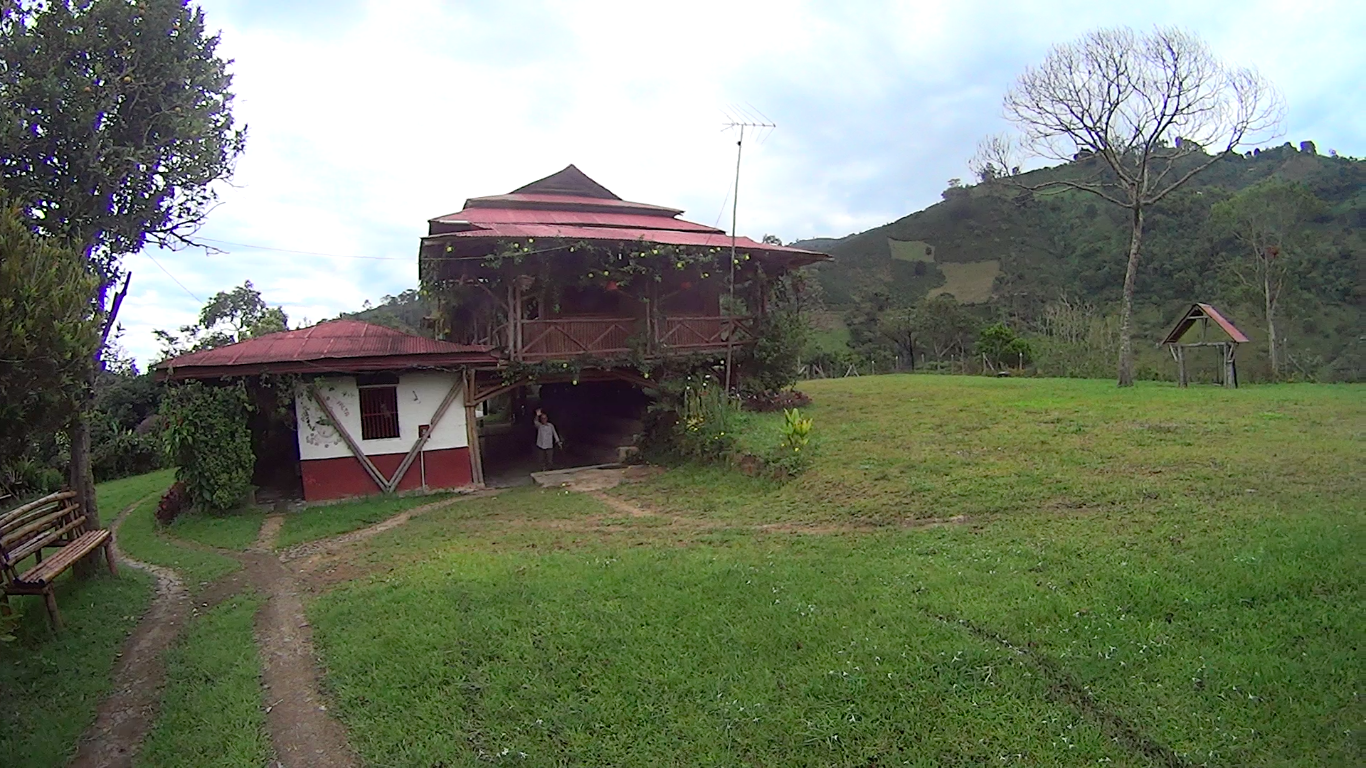 The cycle back down from Belisario was extremely fast, fun and quite dangerous!  I headed into Finca El Encanto (2 kms from Palestina), a wonderful coffee farm with lots of fruit and vegetables that uses no chemicals. I was fed three meals daily and shared delightful company. I ended up staying for three weeks! 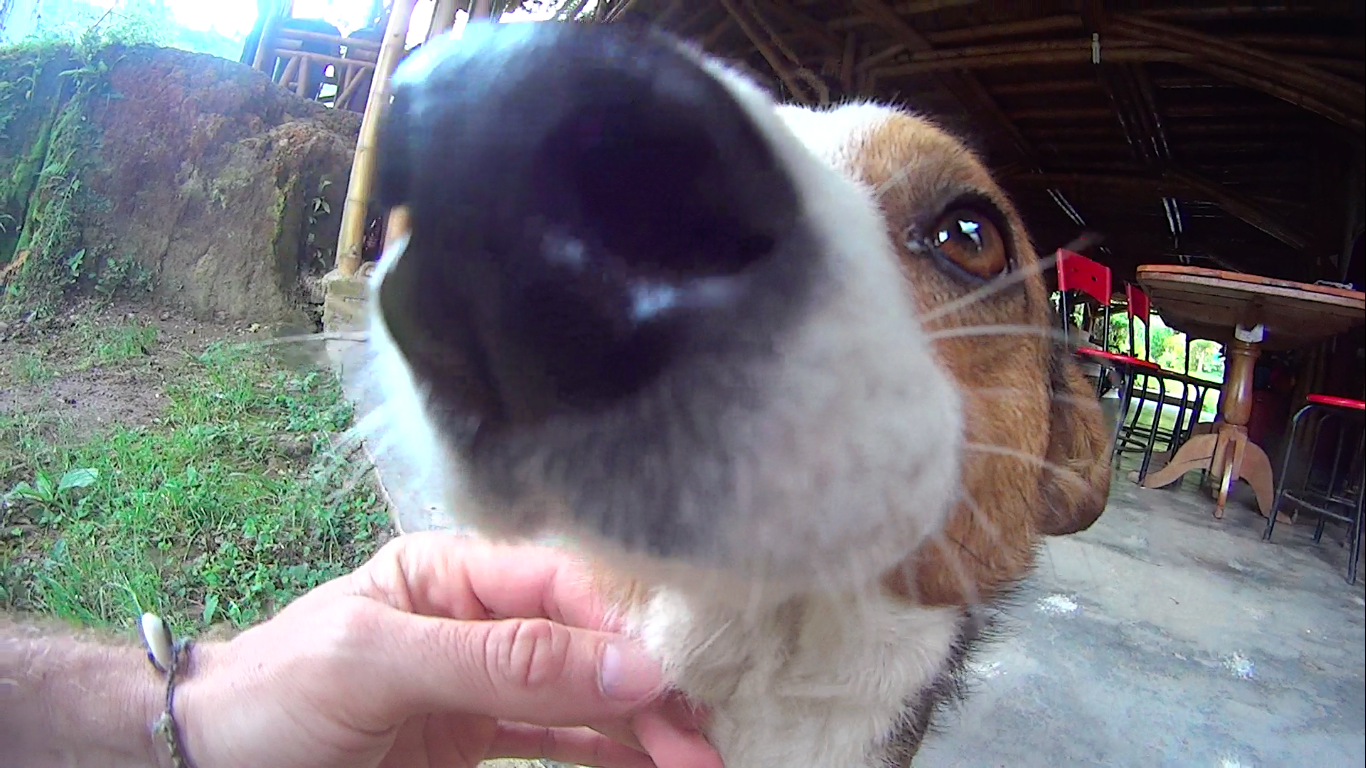 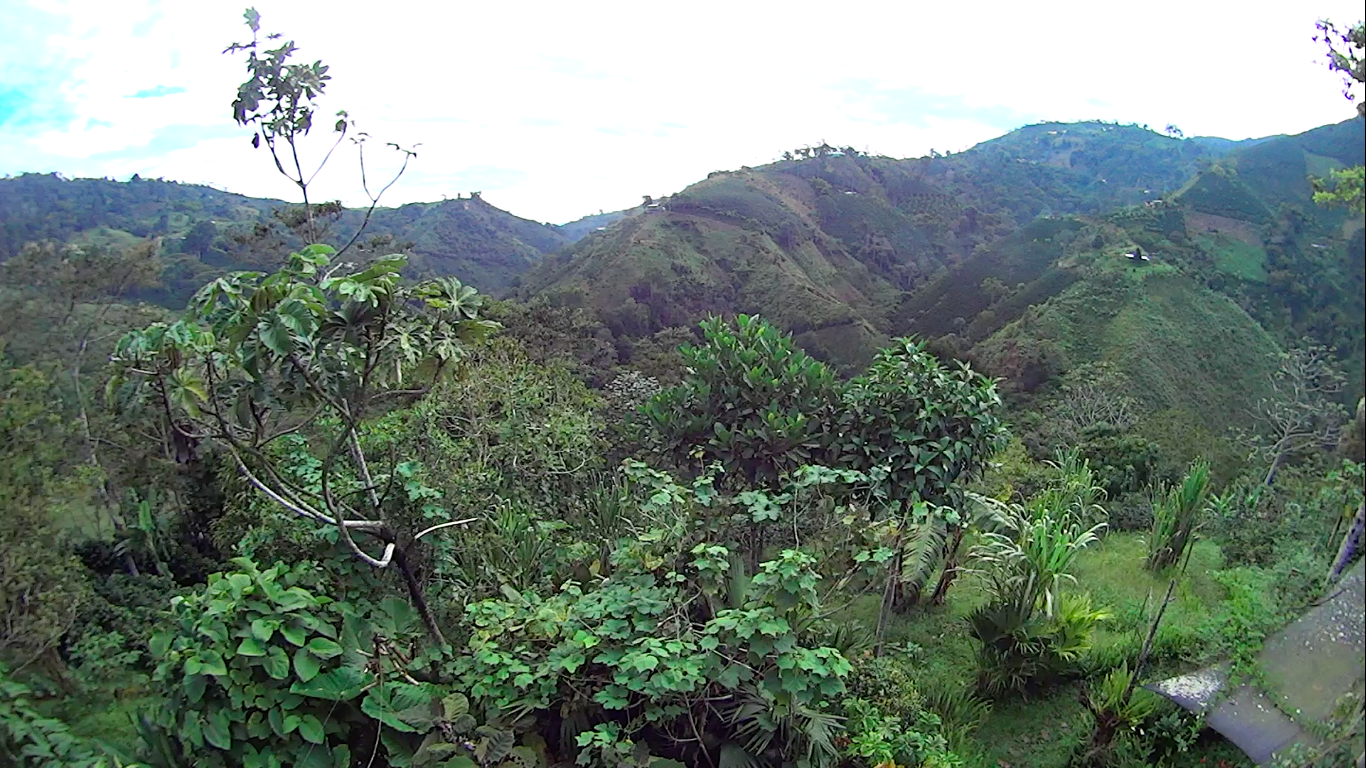 My bright room overlooked their valley, coffee field and large area of land; nothing more than the sound of the river and wildlife could be heard. Their coffee was of the finest Colombian quality, the next post will show you how they make it in Colombia! 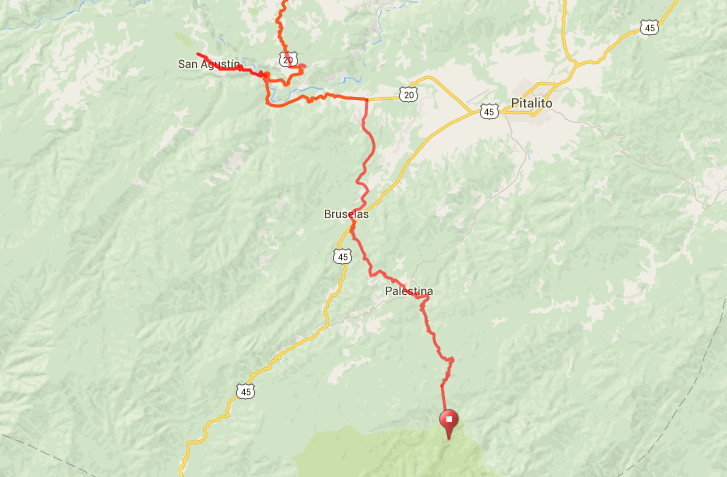 ROUTE THOUGHTS: This route avoids entering Pitalito.  The unpaved section from San Agustin to Bruselas involved no major hills. From Bruselas to Palestina there was a steep unpaved climb and descent, undoubtedly it would be easier via Pitalito but where’s the fun in that?  Once in Palestina, supply up with three days of food and head to La Mensura; it’s a steep unpaved climb (or take a ride for around COP 5000 that goes three times per day).  In finca Belisario, you can leave you’re bicycle and hike into the park.  They said it was camping only due to low season but they let me sleep on a mattress on the floor which was fine.