The adventures with Javier continued in full force after the first stretch from Bogota.  This is part II: 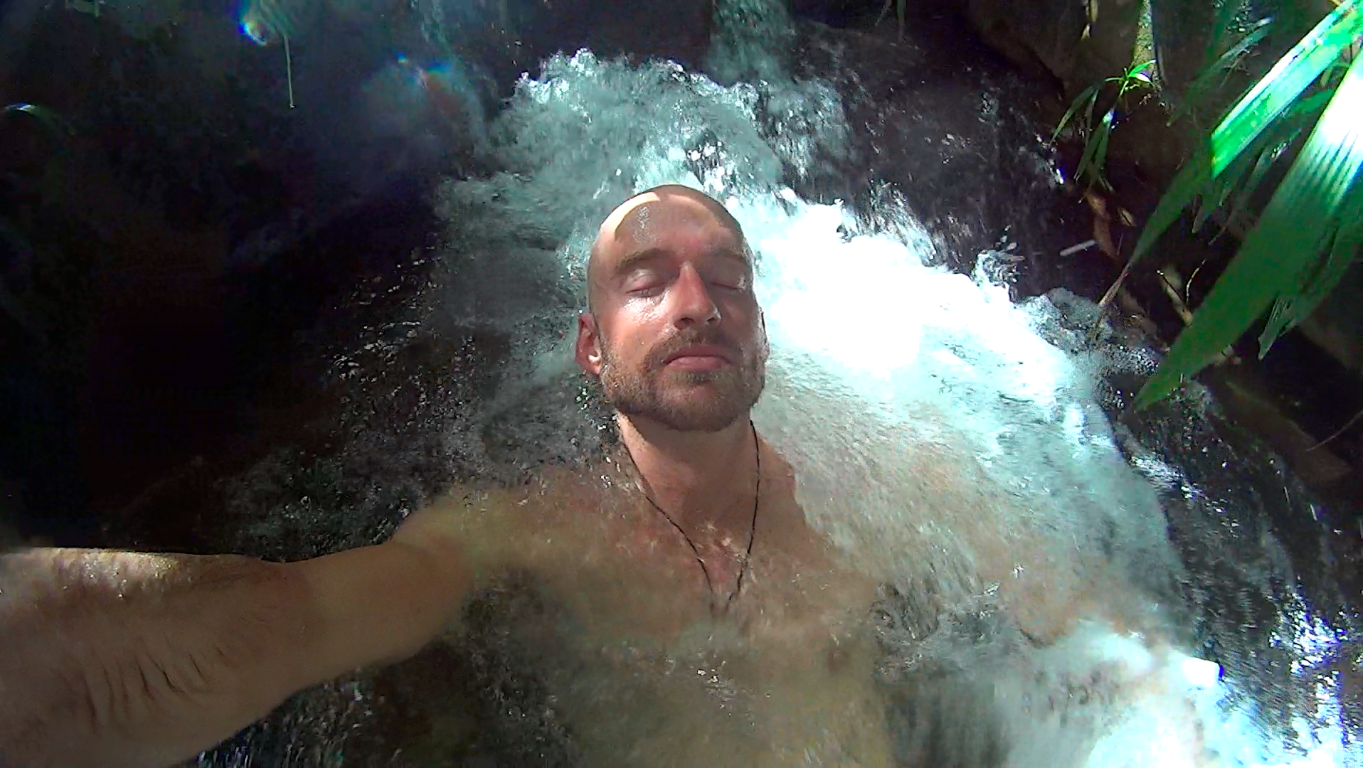 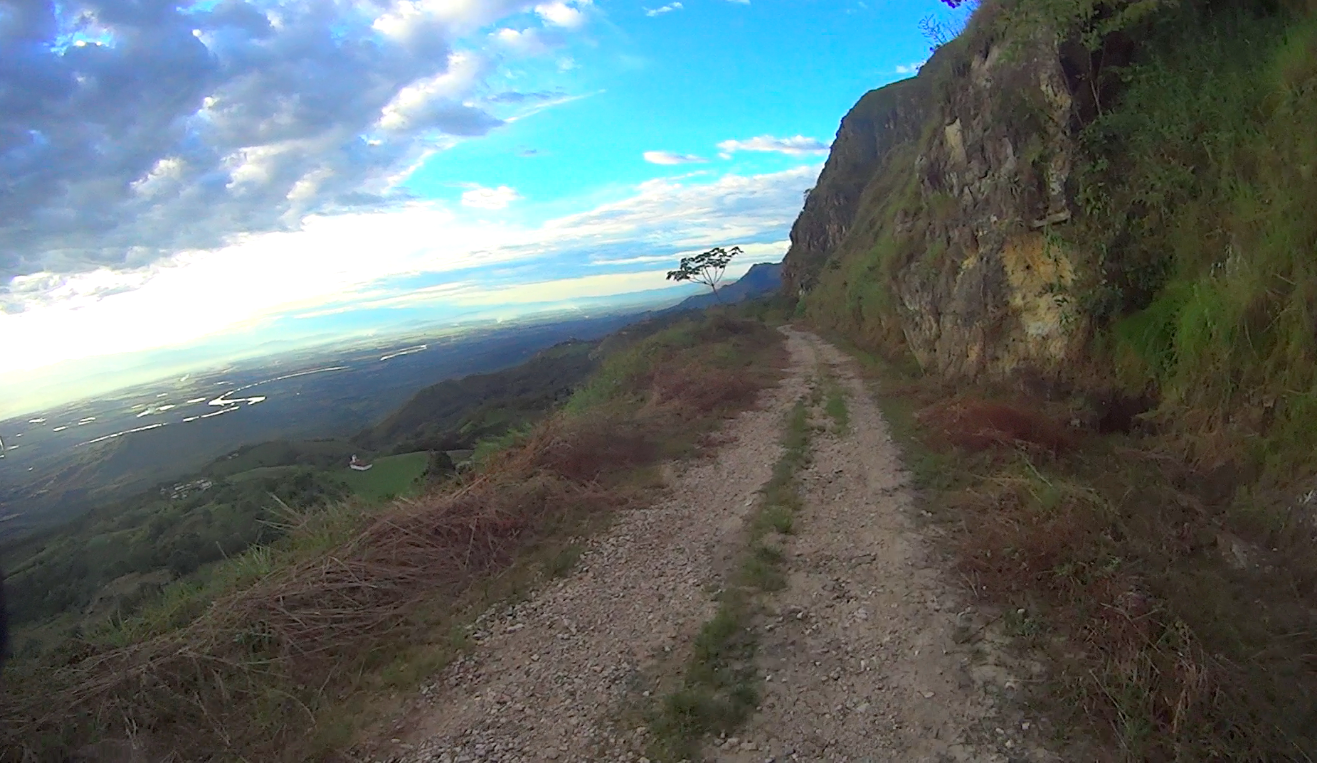 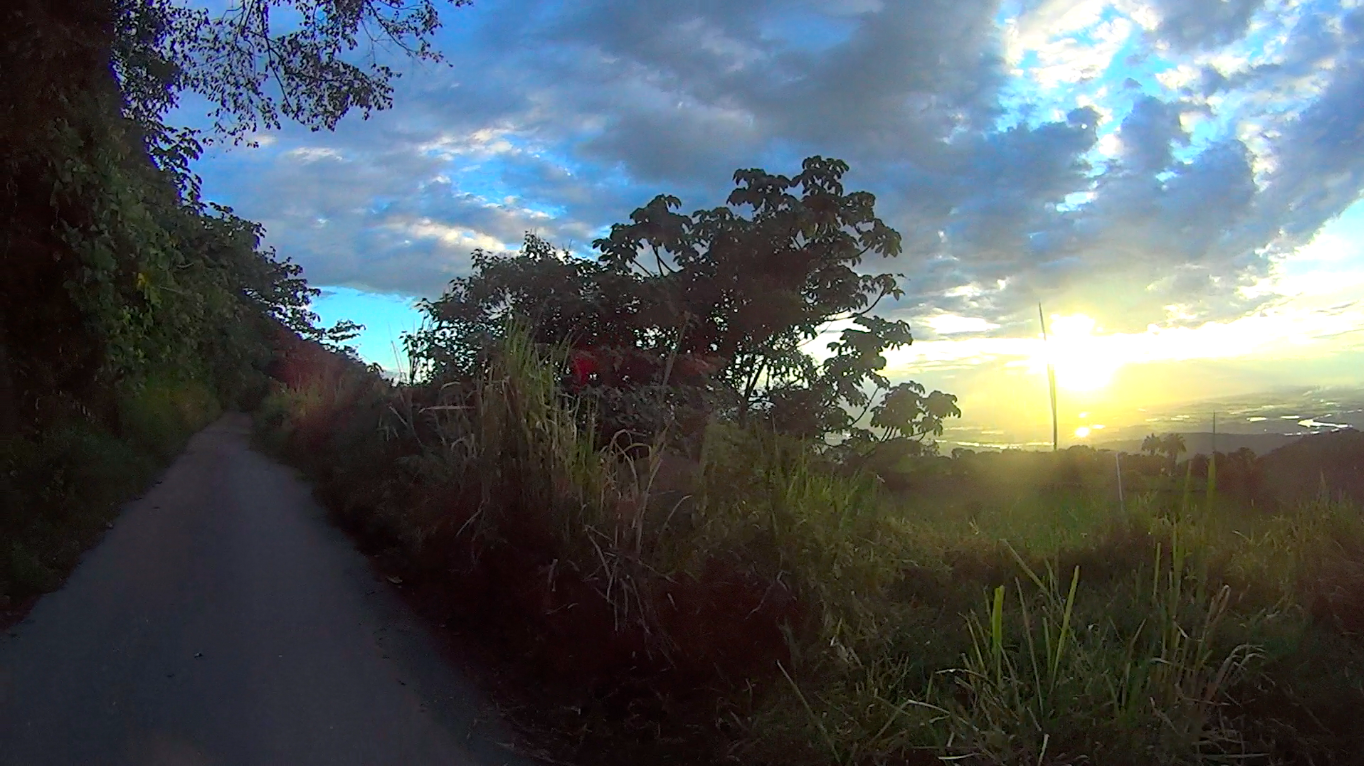 After our trip across the lake we climbed up and over for a spectacular view of the extensive planes of Rio Magdalena stretching all the way over to mountains of the Cordillera Central.  We found a great campspot by a church before heading down further towards the hydroelectric dam in Lake Prado (Tolima).

In Lake Prado, we rented a canoe for the night for the bargain price of COP 10,000 (US$4) at a bakery near to the main wharf.  My experience paddling the unprotected coast from Panama to Colombia came in handy (surprisingly it requires a little bit of skill) and we confidently headed off across the large lake with the intention of finding a place to wild camp for the night on a distant shore. After half an hour it was totally dark and, being mostly uninhabited, only a few lights could be seen dotted around the shore so an understanding of where we should go was somewhat complicated. 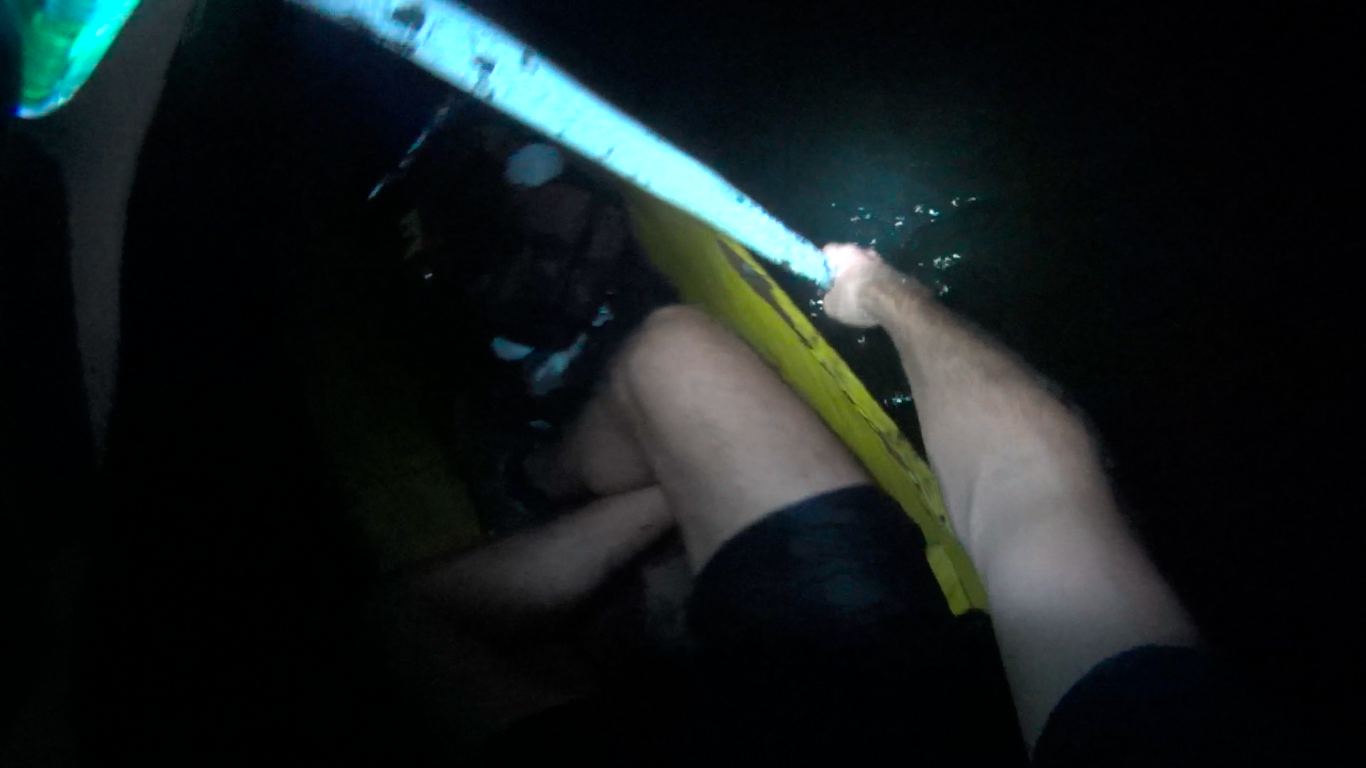 On reaching the other side of the first part of the lake we were met with the largest number of insects I’ve seen since the brown clouds of mosquitos in Alaska.  We found a potential wild campspot but the insects were too much and we continued.  We passed through a narrow stretch and into a larger expanse of water.  Hugging the shore, we discovered that most of it was rock and cliff and impossible for camping.  Bored of insects flying up our noise and into our ears, we decided the prudent thing to do would be to cross this new section of water and head to where one of the lights were.  On arrival at a rather expensive looking hotel we were directed towards another spot where camping was permitted.  After probably an hour and a half of paddling around in the dark since we first got in the canoe it was a relief to finally arrive at a nice spot situated on an island where the insects weren’t a problem (I think the owner was called Hernando Ruenes – ask the people that work near the main wharf on how to get there). 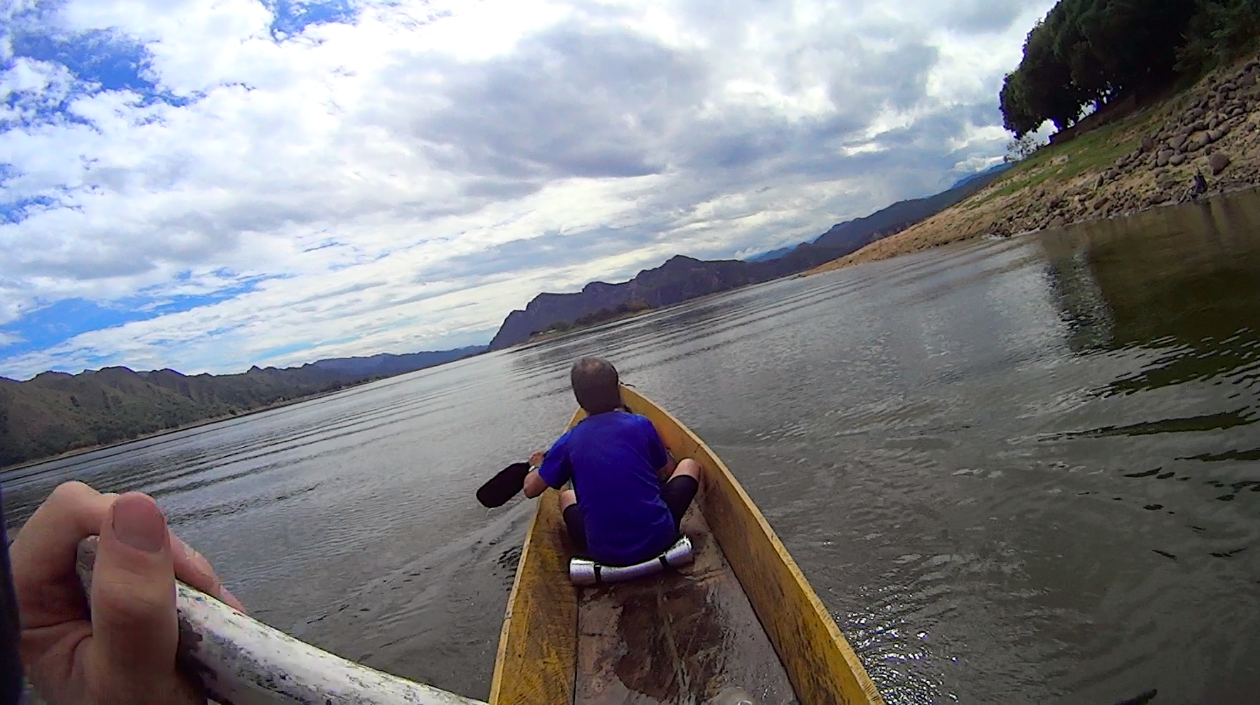 We only spent one night on the lake although it was beautiful; mountains jutted straight out from the shore and there was plenty of potential for exploration (e.g. Cascades del Amor, Laguna Encantada).  It could be worth spending a few days there.  Perhaps in another season the insects aren’t as bad as well.

In the town of Prado the day before we had been warned not to take the road Tatacoa desert via Dolores, Aplujarra, and Baraya due to previous guerilla activity.  Some said it would be fine. Conflicting advice.  One bus driver said their company stopped going there due to extortion inflicted by the FARC.  Our other option was to head south and take the canoe across Rio Magdalena at Natagaima but were warned against delinquency there.  After a fair bit of discussing, the painful decision to head back north via Purifcación was taken, it was our only remaining option.  I imagine any of the routes would have been OK and the decision could have gone either way but it’s really difficult to know who to listen to and Colombia isn’t really somewhere you want to mess around too much (said from personal experience on the Caribbean coast!).

It felt rather disappointing to be heading back to Purificación but the paved section was surprisingly quick and we were on the main arterial highway towards Neiva in no time.  As night approached we stopped to ask for a place to camp and ended up with a family not far from the road.

We headed on south the next morning, stopping in Natagaima for some delicious breakfast (’caldo’) at the cheaply priced local market. Shortly before the first (and less used) turn off to Tatacoa, a woman selling drinks on the side of the highway warned us of recent threat of guerilla activity on the route through La Victoria.   This was immensely frustrating news.  Further questioning of other locals revealed that they hadn’t heard anything but, again, it’s hard to know.  We took the chance so after only 50 or 60km of relatively dull highway riding we were able to escape on the hot dusty track towards Tatacoa desert.  One section passed through a tunnel which would have been the perfect place for an ambush (I thought as we cycled through).  An alternative would be to take the canoe across Rio Magdalena at a place called Patas, this would avoid the tunnel (I believe Nathan (velofreedom.bike) did this).

We stayed in La Peñon El Constantino which has a pool with a spring (at COP 10,000 or around US$4, it was our most expensive camping place).  Checking out the talk at the observatory was interesting and I got to see the rings of Saturn, Jupiter, a star going supernova and the fine details of the partially illuminated moon through some enormous telescopes. Loved it.

Not a bad campspot view. 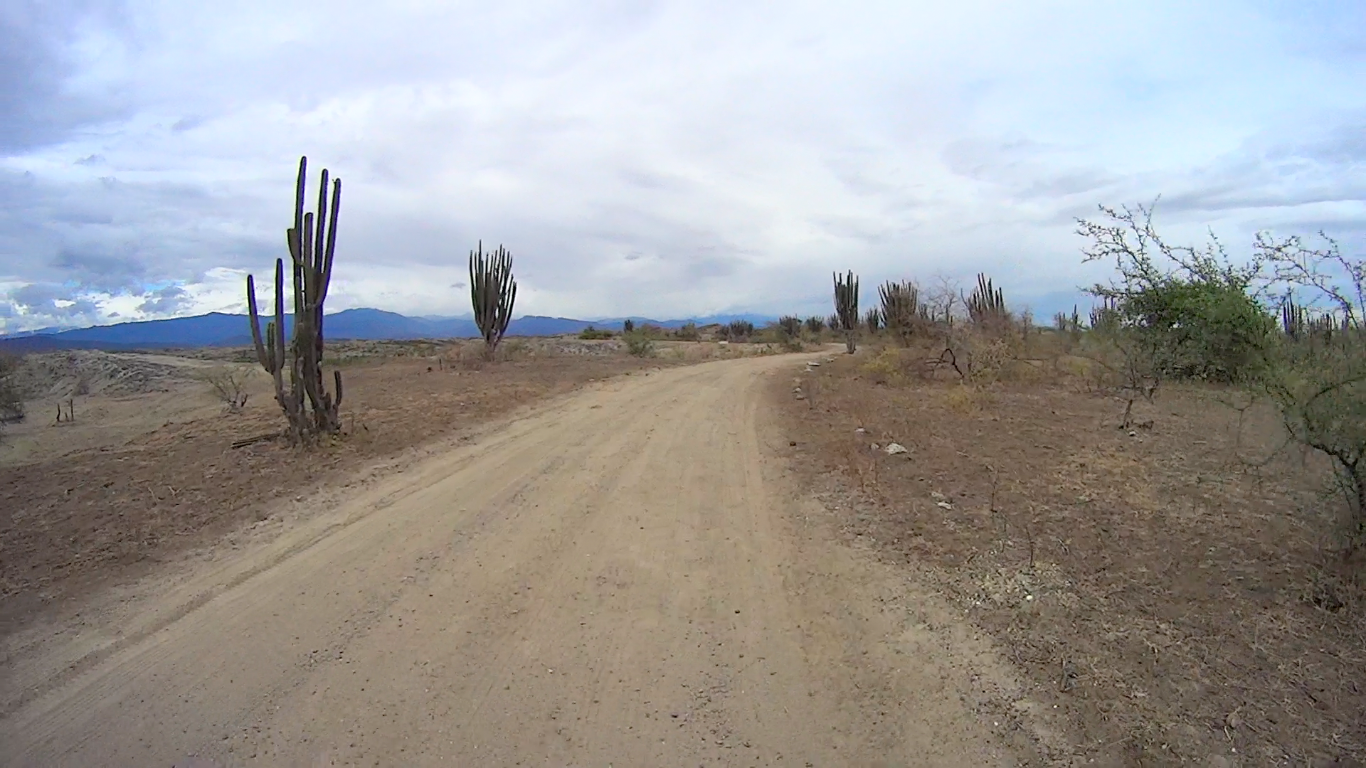 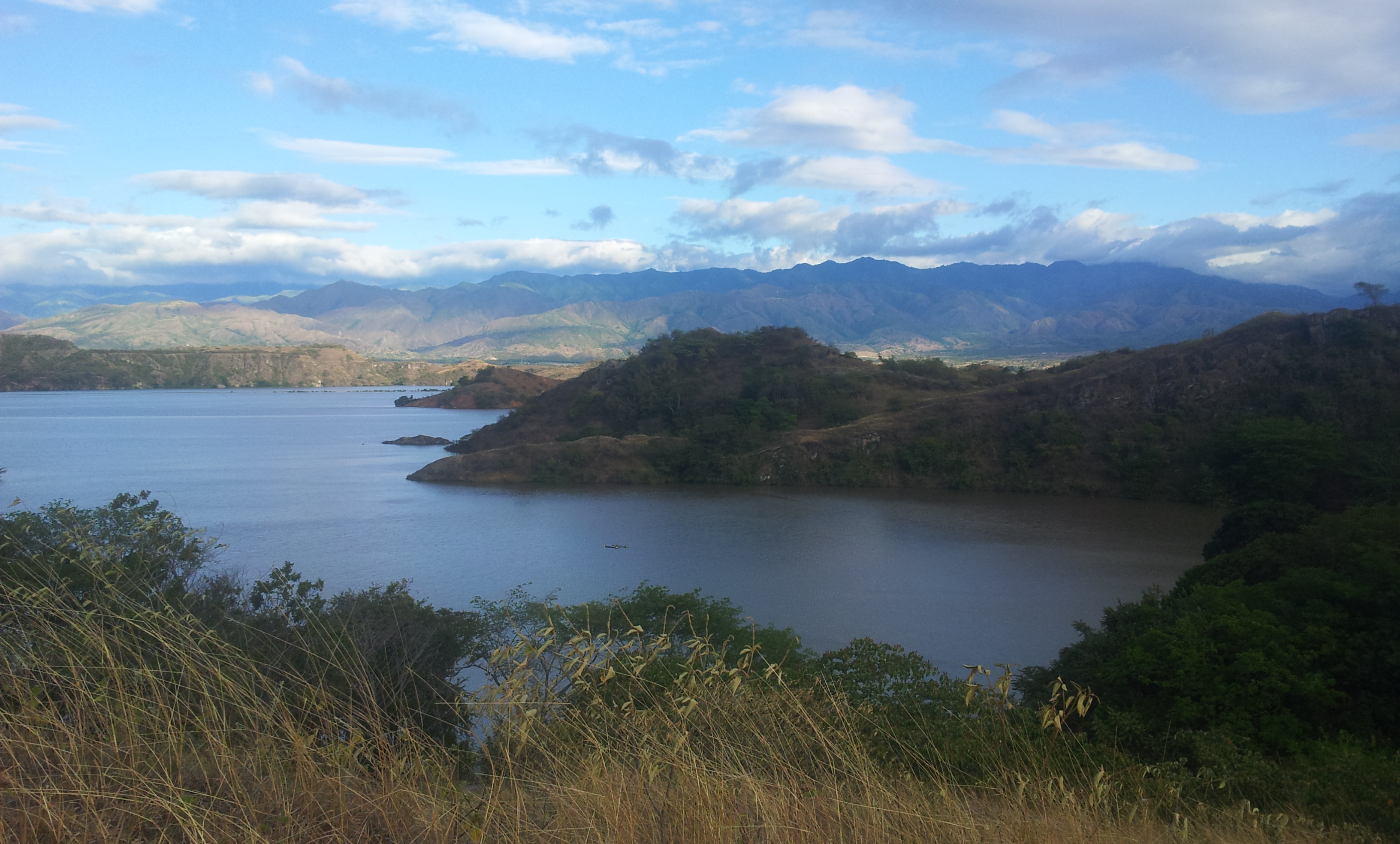 This was as far as we got in our short cut to Hobo before we had to turn round. Still… it was a good view for a campspot

Passing through hot Neiva quite quickly,  we took the back road to Rivera which proved to be a bit more climbing than anticipated.  We camped a few kilometers before Rivera and then headed down to Lake Betania.  At Yaguará we had planned to follow an epic route up to Iquirá and then Tesalia as noted on Cass Gilbert’s blog but were heavily warned not to by the police and locals due to guerilla activity on this stretch (particularly Pacarní).  Again, I would guess that it would be fine but who knows?

Our only option for continuing south was to backtrack and head down to Hobo.  Instead, we tried to be clever and took a lancha across the lake.  Then, after a dirt track of about 5kms we found ourselves at another water crossing.  We had been told that local fisherman would take us to Hobo although we may have to wait some time.  It turned out that the only motorised canoe was broken down and they refused to paddle us since it was too far.  We scrambled up the hill and camped near the top.  (It may have been possible to catch a motorised lift with the supply boat used by the petroleum company that arrives early in the morning and late at night but since we missed it twice we didn’t wait around a third time to find out; that would have required the whole day).  We begrudgingly headed back in the lancha to Yaguará and cycled round on the hot road to Hobo.

After a short stretch of main highway we slipped off again and took the route via Portrerillo which turned out to be a good move but quite a bit of climbing.  Although there were previously problems here, all the locals said it was now totally safe.  Arriving in Gigante, it was time for Javier to finally to head back to Bogota and for me to continue on my way solo… 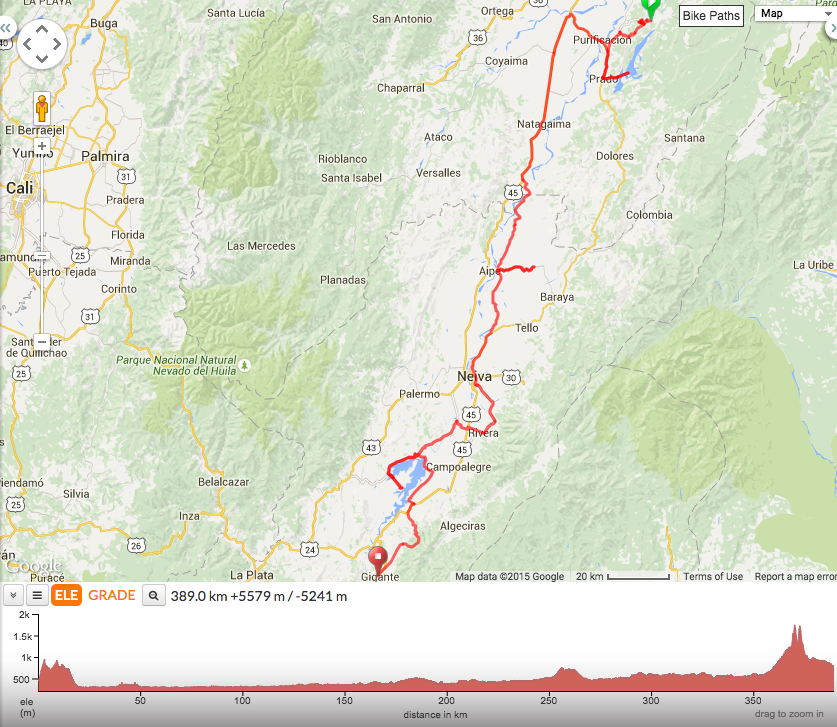