Having hardly ridden my bike at all for the last few months, I suddenly found myself struggling immensely to keep up with a well trained cycling machine, aka Alonso, who I met through the cycle touring network ‘warmshowers.com’ (videos below).  Before heading to Duitama though, we made a morning trip to Panache by bus to check out Chicamocha canyon.  Having experienced the pain of missing out one too many times on some of the thousands of distracting possible side trips this journey has offered whilst crossing two continents, I wanted to avoid the tedious sense of regret and desire of wanting to travel back to San Gil to check it out.  Even travelling short distances in Colombia seems to take many hours whatever the transport.

Chicamocha is a spectacular canyon, there is no doubt, but this has also brought with it the predictable human desire of profiting from nature by creating a massive tourist eye sore. Having dragged Alonso there (which unfortunately ate into his long weekend), I hoped we could make the most of it by taking a ride on the not inexpensive long cable car that passes from one side of the canyon, down to the river and up the other.  Although a dramatic view, the sense of somehow financially rewarding the businesses that made this thing made me feel somewhat uncomfortable.  Passing over fincas that once arguably possessed living quarters that could compete on a worldwide scale, I couldn’t help imagining how disappointing it would be to suddenly have a noisy cable car passing over the top of you.   Mostly in the name of profit (as far as I can see).  Having finally escaped the long cable car ride (once you’re on it, you’re doing the whole thing) I emptied my wallet further into the owners’ pockets of the mildly interesting zip line with an admittedly epic vista… 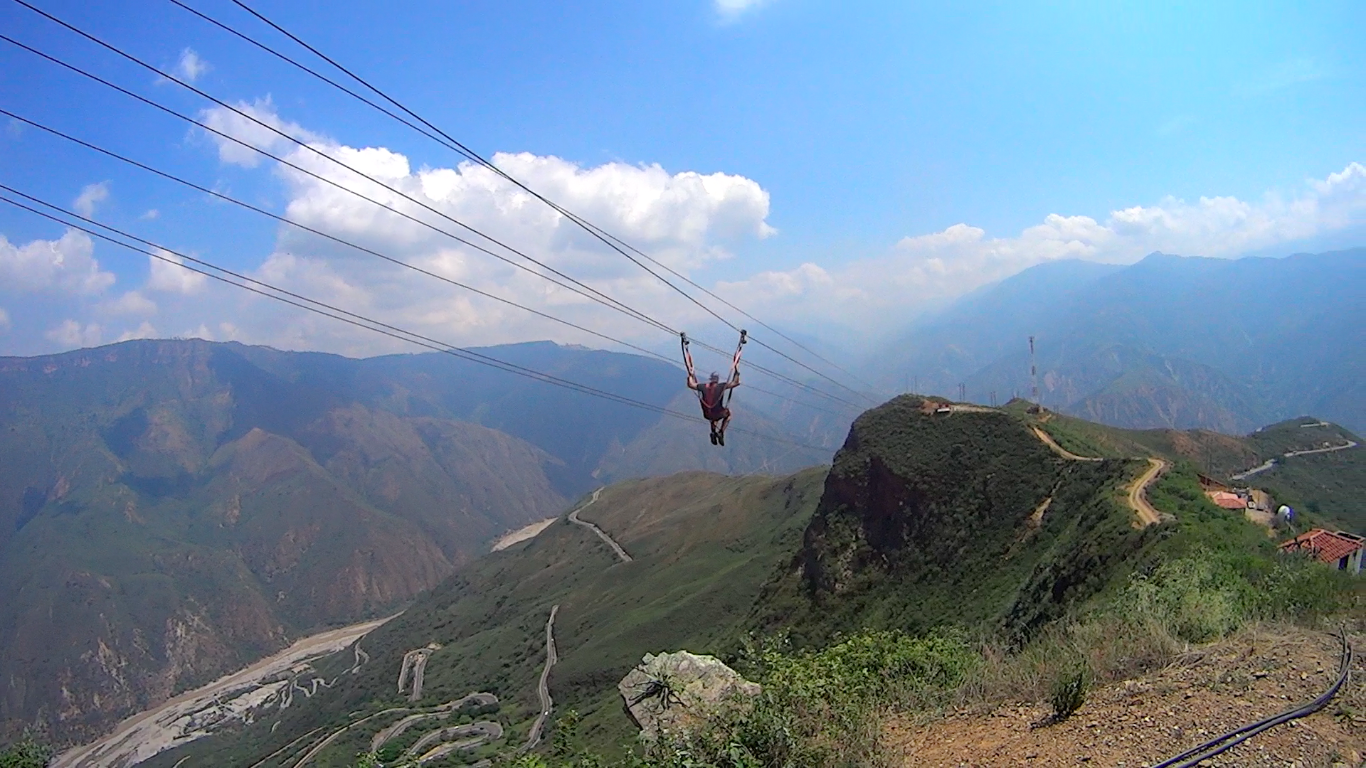 Anyway, Chicamocha ticked off the list, we headed back to the adventure / ‘tourist capital” San Gil and started by bike on the quiet road to Duitama. The ride passes through a variety of scenery starting fairly hot in San Gil at just over 1100m. A few miles after stocking up in Charalá our route turned to dirt and then it started to rain hard and we found shelter for the night in a school.

The next morning the dirt road started to climb more steeply, passing through the Tao community (near Bogotcito on google maps?).   It was explained to me that they are nervous of outsiders and released bees to successfully defend their territory from paramilitaries during times of conflict.  As we passed through, I was expecting a few unfriendly looks but actually received nothing but smiles to my pleasant surprise.  We noticed a stack of bee hives on the way out, possibly situated to serve as a warning to any future adversaries that get the wrong idea or maybe they just like honey? 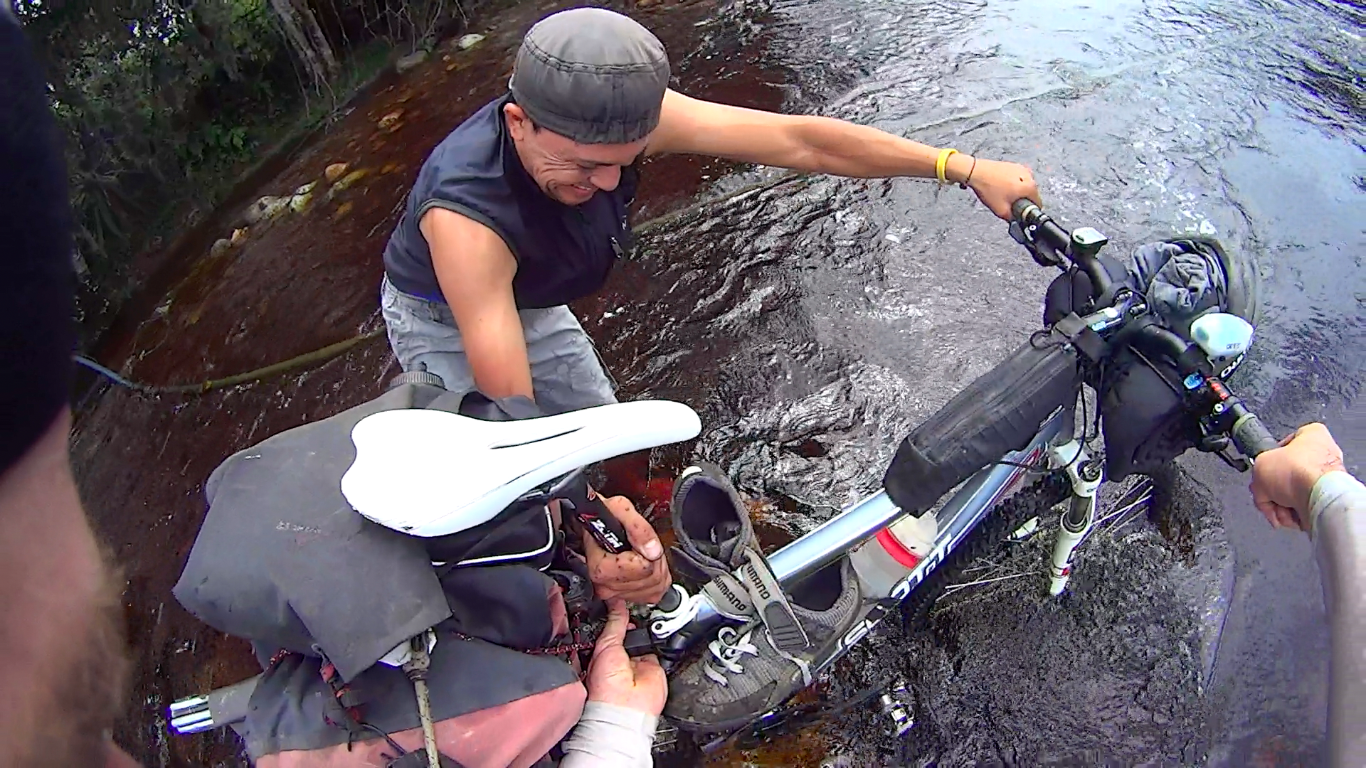 After the heavy rain the night before, this river was hard to cross with the all the gear and large slippery rocks.

After a 15 minute descent, the dirt road then began to climb relentlessly into the rain and clouds.  After another night camped on the grounds outside some kind of village hall, we reached the pass at around 3600m and we were able to finally enjoy a long descent down to Duitama.  All in all, due to my less fit than normal state it was a tough ride.  Even after strapping on all of our food panniers to the back of Alonso’s bike, it was almost impossible to keep up with him.  The familiar site of his legs pounding away into the distance became somewhat tough with the rain pouring down my face.

Our trip from San Gil to Duitama:

Previous days: From Barichara to San Gil and the pools at Curiti near San Gil

Route notes: later on,  I was told of a righthand turn off (I believe near or after the Tao community) where one could avoid the decent to Duitama and head to Palermo and then Gambita, Arcabuco and finally Villa de Leyva.  I didn’t know of this so I headed down to Duitama then back road to Paipa and had to climb back over to Palermo which is a good route itself.  This means you can stay on quiet back roads from Girón (Bucaramanga), Zapatoca, San Gil all the way to Villa de Leyva and possibly beyond (I’m yet to explore after the route after Villa de Leyva to Bogota).