This update is long overdue but the reality is that posting updates from the WordPress android app is painful at best requiring multiple attempts and lots of swearing. So in the meantime I have been posting to my Facebook profile which can be found here: profile. I’m trying to create a Facebook page too: link – which I think only my mum follows at the moment. 🙂 If anyone knows how to make posts to both Facebook and WordPress simultaneously please tell me!

Since San Cristóbal de La Casas: I’ve climbed 7 volcanoes (including the highest in Central America), had 4 weeks of Spanish schooling at the schools of Pop Wuj and El Quetzal (both highly recommended) and stayed in San Pedro (Lago Atitlan) for a few days. After Quetzaltenango (also known as Xela) I cycled the 175 km (very hilly: a big day!) to Antigua where I left my bike to visit the ruins of Tikal in the far north and then the famous turquoise pools of Semuc Champey. Leaving my bike in Antigua was a tough decision and I stared longingly out the window of our toilet-smelling non-air conditioned bus as we twisted and turned our way down vast mountain sides. With more time I would have ridden it, but as it is I’m going to be very pushed to reach Tierra del Fuego before next winter. More detailed posts on the above to follow shortly. In the meantime I have a couple more days here before I head on to El Salvador! 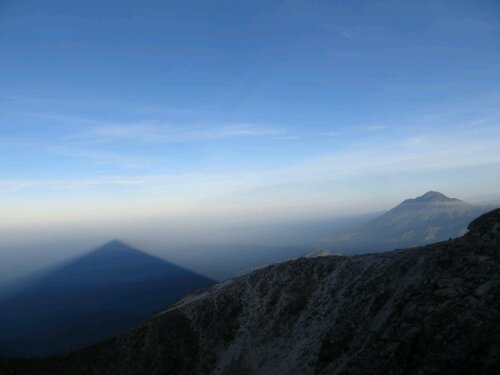 Sunrise shadow of Central America’s highest peak (Tajumulco) taken from the summit. The second highest peak is to the right (Tacaná).